Andrew is the second of two boys in his family and his mom once told me, "I thought Patrick had so much energy... And then I had Andrew." Did she accidently prophesy over me when she said that? 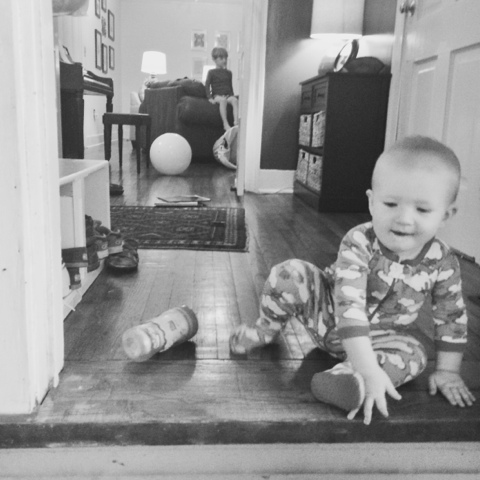 We all just feel like we kind of got whiplashed in our house. Suddenly our happy, content, easy baby is a ball of fire. 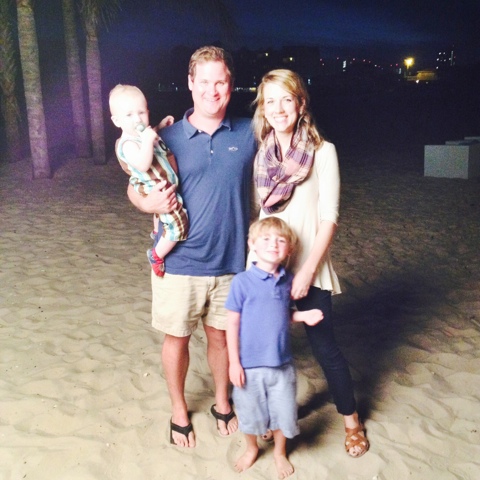 An adorably affectionate ball of fire. 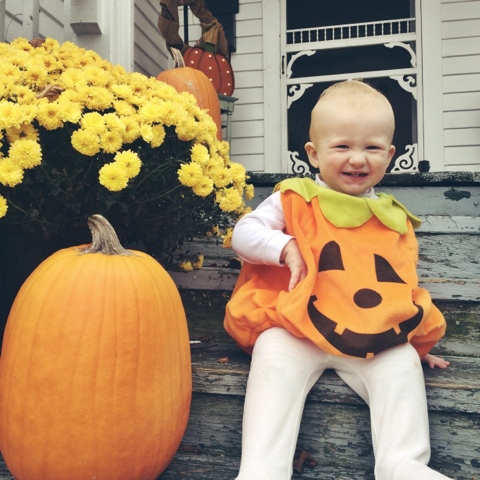 A couple of months ago, Andrew started to call him "Chachi," and now none of us can stop. Because Chachi loves to cha-cha and it's just so appropriate. (Look at that Bumble-bottom!!) 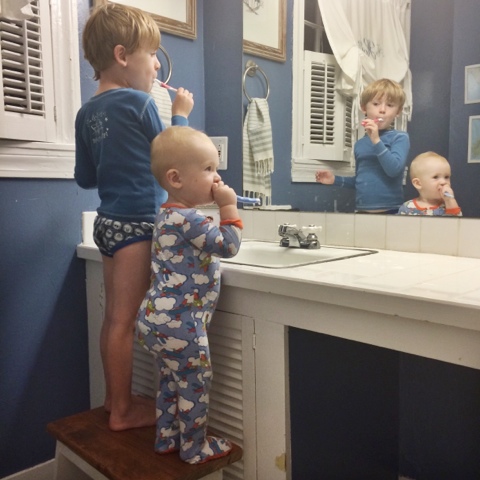 Chachi spends most of his awake time emptying out every drawer in the house. He refuses to stay in any room for longer than a few minutes at a time and he runs (stomps) even faster when you tell him to stop... leaving cups and veggie straws and bowls like little bread crumbs. :) 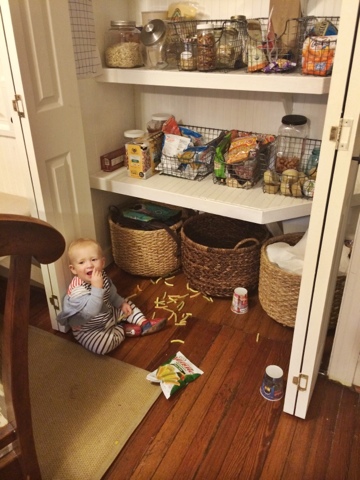 His favorite destination is the hall bath where he likes to grab his toothbrush and climb the stool. And wait for the water. I've learned that turning the water on always, always means that we are asking for a full-out tantrum unless we want to keep the water on for the rest of our everlasting lives. He would spend his entire day at the faucet if I let him! (Also a note that Instagram-filters are the best bathroom cleaning tool I've found... wink, wink.) 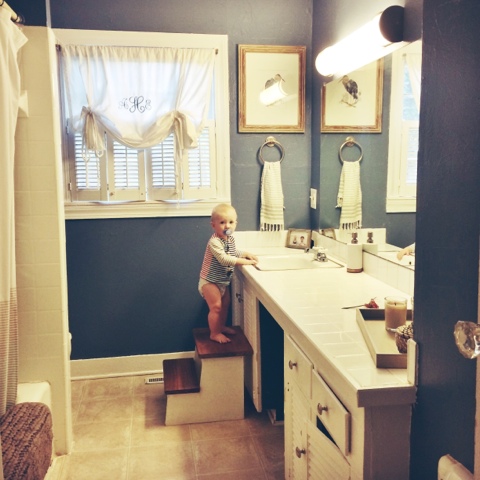 He loves his pacifier and calls it "pappy"...mostly I pop it in his mouth because he looks SO cute with it bobbing up and down in the middle of his squirrely-cheeks. I really don't ever want the pappy stage to be over. 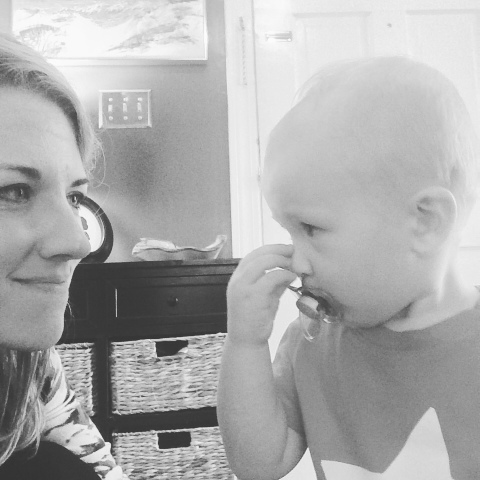 The only time I really want to take it out is to hear his sweet little words. My favorite word that he is
saying right now is "Melmo"...as in Elmo... and I know I should not be encouraging TV-watching at his age but sometimes I turn it on just to see him flap his arms and point and say, "Melmo! Melmo!" 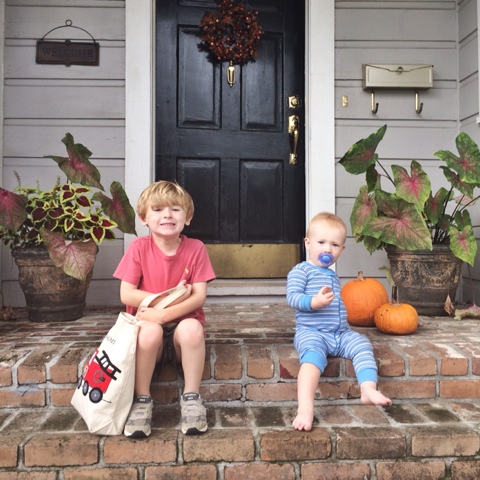 He likes books but he is sooooo specific about what books he wants to hear. I put him in my lap and then begins the petitions to my Lap King: This one? (pushes away) This one? (pushes away and sighs) This one? (pushes away and shakes his head at his foolish servant) This one? (Pushes his back into my chest to push me back to signify he is ready to kick back and listen.) For about a month the only book that would satisfy his taste was Baby Beluga, which is actually a song book. He sang with me "Baaaay-beee Baaaay-beee" and it.was.precious. As anyone would from hearing a song five times a day for a month, he grew tired of it and now we have landed on The Happy Birthday Book and The Happy Man and his Dump Truck. 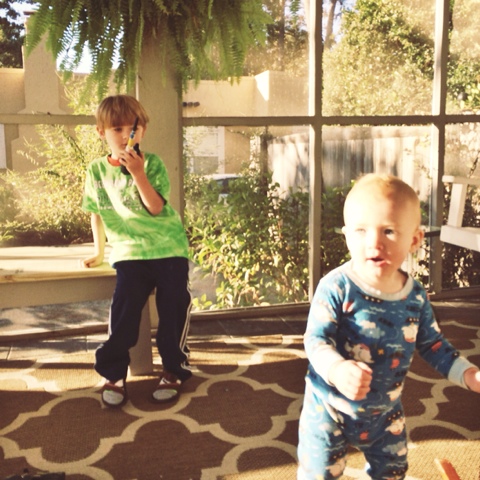 We found out this past month, after a scary reaction to a Lara Bar, that he has an allergy to cashews. He has a lot of food sensitivity issues, so I really think he has more allergies than just this but so far we have only done a blood test for the ingredients of the bar. I'm praying these are things he grows out of and not the beginning of a life of label-reading that sounds so exhausting to me. But of course I will do anything, however exhausting, for this Littlest Man of mine. Who squeezes his arms around my knees and looks up with the puppiest-blue eyes to say, "Mama?" 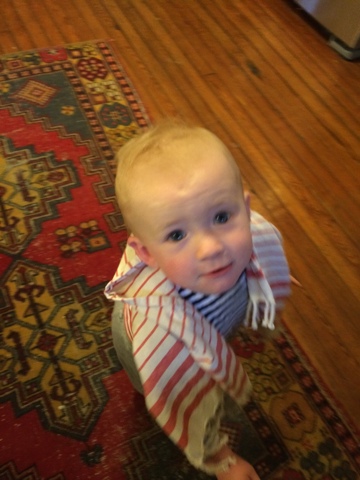 He's mostly a Mommy's boy (What luck for Daddy in the middle and beginning and end of every night but the THREE nights that he's slept his entire 15 1/2 months and I won't complain about that any more outside of this parenthetical statement but since this parentheses is not over yet OH MY WORD I really miss sleep so much), but he yells "Dada!" at the end of every day when Andrew is home from campus and the door opens. He also cries just about every morning when he leaves. And wrestling time with Daddy and Brother on the living room floor is just about his favorite. He backs up to the TV stand for a running start, yells "EEEE, EEE, OOOO!! (One, two, three?)" and stampedes with his head down like a bull right at Andrew's head. It throws us all into fits of laughter. 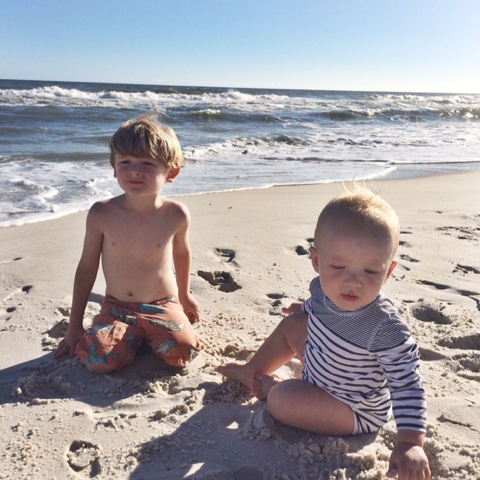 There's actually not much that he does that doesn't make us laugh. It took us at least three years to convince Wilson to use a fork at meals and Charlie demands one at every meal and used it perfectly the first time he ever put his hands on one. He's so independent and such an entertainer and I don't know what in the world we ever did without him. 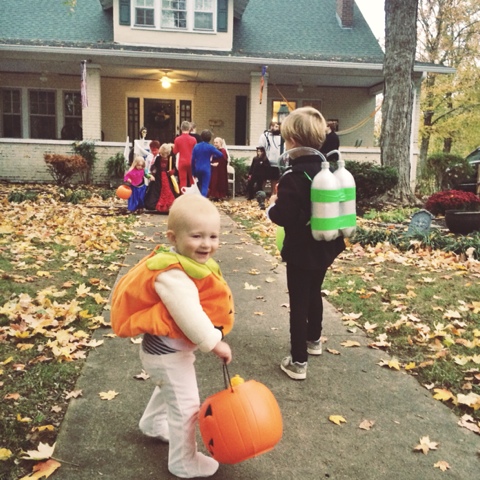 As brothers, Wilson and Charlie are in an okay stage right now. It seems like it's hard to hit the sweet spot of them both wanting to play together at the same time. Sometimes Charlie wants to play and Wilson shuts him out of his room, and sometimes (a lot of times) Wilson wants to hug on Charlie and Charlie just doesn't like to be touched by Brother. But when we hit the sweet spot, man is it sweet! 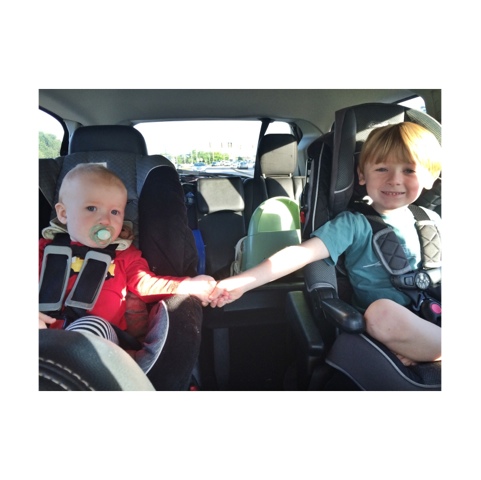 Chachi is more stubborn that Wilson ever was, telling us "no" and asserting his will in just about every situation. This takes place mostly on the diaper changing table as he hates a diaper change, but I've found I can mostly distract him by pretending his hand stinks (?) which catapults him into the cutest giggles you've likely heard. 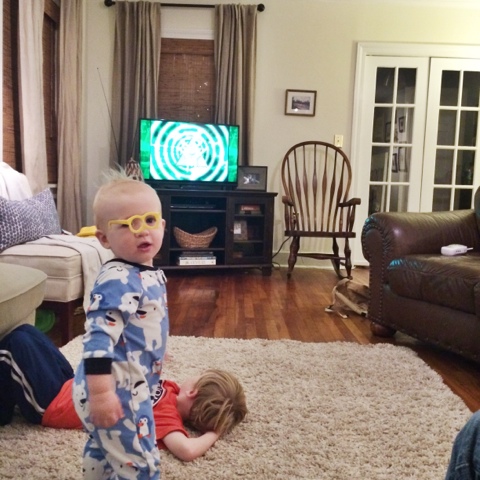 He likes apples "bapple" and bananas "ba-lalalalala" and he likes to hold the banana up to his ear and say "Hey!" just like Daddy taught him. In fact, he also likes to wave and say "Hey!" at perfect strangers at grocery stores and driving in the car and one of my more embarrassing moments happened at a Chick-fila when just Charlie and I were having lunch--and he kept inserting himself into the (very serious, very emotionally-driven) conversation between a guy and a girl sitting at the booth next to us... Whilst I failed miserably at turning him around and ended up all but sinking under the table. Going to go ahead and predict that he's an extrovert just like the other two boys in my house. :) 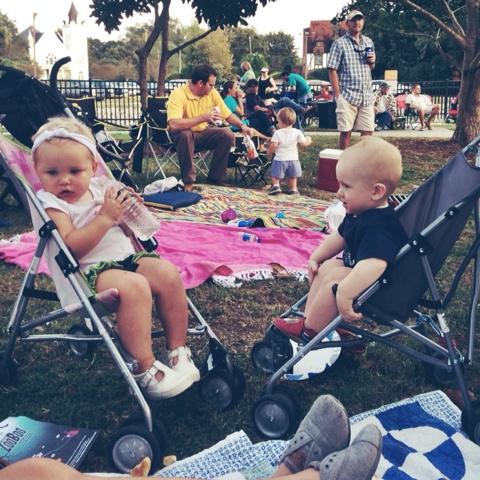 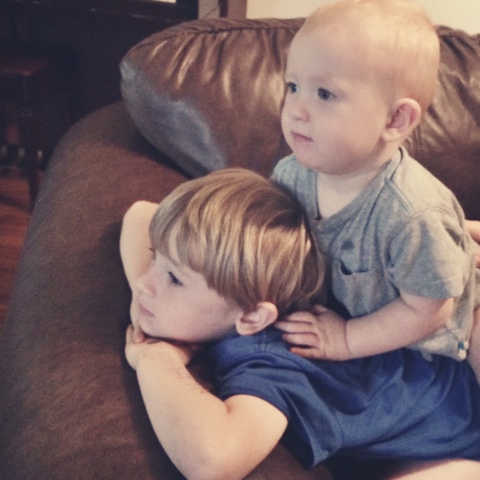 I'm certainly the luckiest girl to have three Harwell boys loving on and taking care of me. 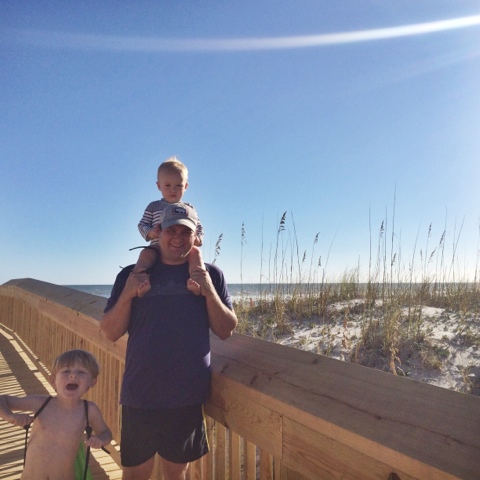 Charlie, at fifteen months, I want you to know that you are making a mess out of our lives. You are emptying cabinets and drawers and the trash can... and all the while, you are emptying out our hearts and laying everything bare. And you are showing me how I love sleep and comfort and a full bank-account more than I love living a life of sacrifice. You are digging around and finding how I have a bent towards laziness. You are leaving the bread-crumbs of my jealousy and bitterness and entitlement all down the hallway. And Charlie, I love you for that. Seeing ugly things and flaws in my character all over the floor is hard-but I want them out. And what better hands to pull them out than your precious little pudgy things, because I know even though you see the very worst in me... you would move mountains to get into my arms. Last night, I was rocking you somewhere in that time which we aren't sure to call night or morning... and you pulled something else out of my heart. Peace. My lips on your fuzzy head, your cheek pressed against my skin, your knees curled into my stomach and so close to spilling out of my lap completely... and there was this peace that all mamas know. A comfort separate from circumstances. That you are mine and I am yours and there is joy in just being, and rocking, and breathing. And that's a joy that you and I have with Jesus, Charlie... and (can it be?) even more heavenly than that moment we had last night. We practice it on the Sabbath Day, we can feel it in our moments of prayer when we respond to The Word with what He says in His Word, but someday those moments will be our forever. I love tasting it with you now and I will love feasting on it with you someday in heaven. I pray that when you see your messes and my messes that you wouldn't be discouraged, but that you would be moved to look for the One who makes sense out the mess. Who truly works all things for good for those who believe. Believe, Little One. We love you so. 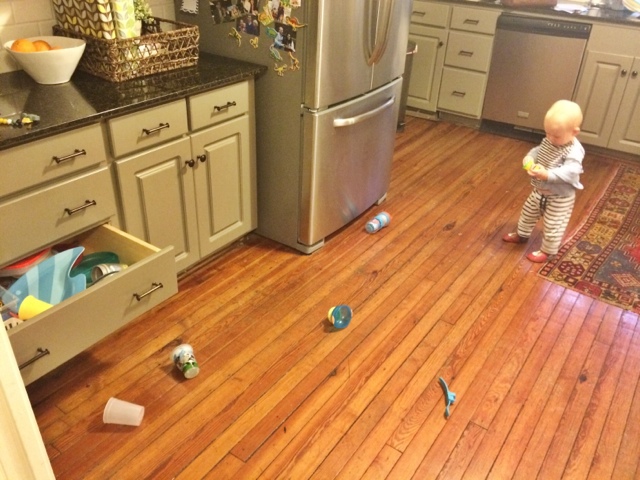 So incredibly beautiful and worshipful!! Thankful I know you and get to enjoy this gift God has given you of writing!