We have siding! Andrew and I can't believe how fast this is going now. I know the process will feel more slow as the interior begins, but right now I love driving up to our soon-to-be home and seeing something new every time! I wanted to show a picture... 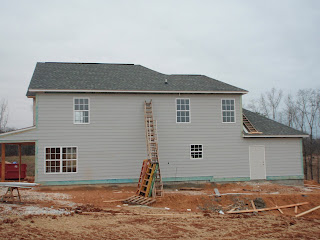 It's hard to tell, but the color is a light gray. "Online" gray, in fact. The front door and shutters will be a dark blue name "Distance." That's one job I would like to have... naming paint colors. How do they come up with those? "And what shade of orange would you say this is?" "Oh... that's definitely a 'Horseback' orange." ??

We've had a really fun weekend. Friday night and Saturday morning were spent at Camp ASCCA in Dadeville for our Crusade leadership retreat. It was a really encouraging time to be with those students who really have their own personal ministry at Auburn. It reminded me again why it's so strategic to work with college students... these are going to be the movers and shakers of our generation. Andrew and I believe that our best chance at being a part of changing the world, at this point in our life, is by investing in these students. We love them all so much! What a privilege we have in our job.

Saturday when we got home I spent the whole rest of the day watching part of Season 4 of LOST. This is the only show I have watched every episode of... and now I am actually REwatching episodes. I never thought this would be possible. This show is captivating. I have a pretty photographic memory and I love connecting the dots... so I am beyond highly impressed with how intricate this show is. They don't miss a beat with connecting a seemingly unimportant moment in say, season one, with a life altering scene in season four! It floors me. I don't understand how they do it... They must have the whole script already written out.

Speaking of TV shows (I am going to sound like a couch potato!), but I must publicly announce my anger with abc for canceling Pushing Daisies. They better be glad that they host LOST, or I would be boycotting them completely. It definitely wasn't a show for everyone's taste, but I am willing to say that it is the wittiest show to ever be broadcast on television (and I am saying this as a fan of both Gilmore Girls and Arrested Development). Not only was the dialogue above par, the colors of the set and costumes were a masterpiece! It really was beautiful in so many ways. In 2008 it was nominated for 9 Emmys, won three and nominated for 3 Golden Globes. What happens to shows like this? So sad. I am embarrassed to say that I may have shed a few tears at the discovery... but I am imploring everyone to go rent the dvds of the first season (you can watch the 2nd on abc.com) and maybe, just maybe, they will finish out season 2 with a made-for-tv movie. That sounds terrible... but it's definitely better than living with no closure. 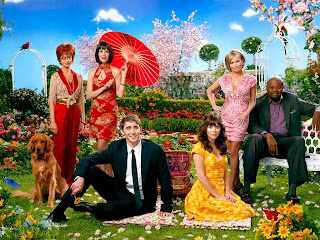 To end... WAR EAGLE to the Auburn women's basketball team! They are currently undefeated, and Andrew and I got to watch them talley another W this afternoon against UT. The game was sold out (quite a miracle for any AU basketball event) and they said it broke the record for attendance of a women's bball game at Auburn. It really was fun and I hope they make it all the way to the Final Four... and maybe even beyond!
at 7:52 PM

Just thought I'd let you know that the script for Lost was already written :).