I realize it has been quite some time since we have made an entry on this blog. Hopefully since we are all moved into our new home and are done traveling for awhile, we will be able to keep up with this blog more intentionally.

This summer we had the joy of spending six weeks in Durban, South Africa. We went with 11 college students from all over the South East region to spread the good news and good deeds of the gospel of Jesus Christ. The summer was essentially broken up into two parts.

During the first couple weeks we were on the University of Kwazulu Natal. This campus had its beginnings in the ugly history of the apartheid. It was originally created as a campus for the Indian population (surprisingly, South Africa has the largest population of Indians second only to India itself!) When the apartheid was over, the campuses started to be integrated (with much opposition.... there were several deaths and many riots that occurred on this campus in regards to the integration) and now KZN (the campus) is about half and half Indian and Black African students with only a very small percentage of whites.

During our days on campus we would initiate conversations with students about their spiritual life. At the end of almost every conversation, we shared the gospel with the students giving them a chance to respond. We had so many amazing conversations.... most of the black South African students had grown up around church, but many were living under the assumption that their good deeds would essentially be what earned them favor in God's sight. After sharing about what Jesus did for us through His perfect life and sacrificial death to one girl, she looked at us with wide eyes and said: "I had a dream last night that someone was going to tell me about this type of spiritual freedom." What a confirmation from God that He had already been at work and we were just stepping into what He was already doing.

In all, we shared the gospel with around 300 students and saw over 25 of them trust Jesus as their Lord and Savior. What was also really cool about this was that we were able to do follow up appointments with almost every student who accepted Christ so that we could teach them how to study the Bible on their own, have assurance in their faith, know the role of the Holy Spirit in their life, etc.

At the end of the summer we had a camp that we invited all the students we met (particularly those who accepted Christ) to come to. It was a two night affair at a beautiful camp ground. Those two days were probably my favorite of the whole summer, because we got to see the fruit of what God was doing on this campus. Students from KZN who had become believers with last year's summer project were actually the ones leading the camp.... sharing their testimonies and talking about what it means to be a follower of Jesus. During one emotional women's time at the camp, Rose (a student who had just accepted Christ that week) confessed that she had been outcast by so many friends and family because of her differences from them and she felt so alone. Another student told her that now she had a group of sisters around her that would never leave her because of their bond in Jesus Christ. This was her family. The fellowship of believers continued to be a theme for this camp as many students found a group of friends who they could be transparent with and still be loved.... a place where they could grow in the grace of Jesus Christ. 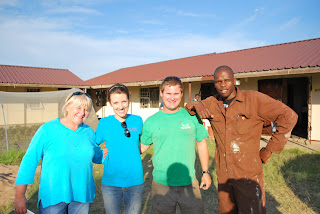 The second half of our summer was spent in the township of Ntuzuma (pronounced In-tuh-zoo-muh). There we partnered with two incredible people who have been called by God to start a hospice (which they have named Ugukanye, meaning "The Light") for HIV/AIDS victims in the area. Prince is a black African pastor who became homeless as a child, learned of Jesus through a ministry that he later went back to help out with. There God softened his heart to AIDS victims and he got a call on his life to bring healing and hope to those dying of this terrible disease. He later partnered with Penny, a Kansas native who lost her ex-husband to HIV/AIDS several years ago. She, too, received a call on her life to take care of those with this disease and thus God eventually called them to work together in Ntuzuma. (The story is far longer and far much more interesting than I have the ability to tell).

Our primary job at Ugukanye was to provide man power for all the physical labor that needed to be done to get their building ready to be a hospice. We spent most of our time their washing, priming, painting, and repairing the roof. We also sanded and painted beds that will hold the future patients, organized supplies, cleaned rooms, etc. We each also got the chance to go on several home visits with Prince and care givers that are hired by Ugukanye to check on those suffering in the community. What a humbling experience. Andrew met a man one day whose body was ravaged by this disease. He and prince picked up his fragile body in a sheet and had to transport him to a clinic. The next day we were told that he died over night. It is so tragic, but death is such a common place occurance around Ugukanye. 33% of the population is infected with HIV/AIDS. The prayer and mission of this hospice is not only to promote awareness, but also to provide comfort and the hope of the gospel to those in their last days before walking into eternity. It was a sobering experience to be a part of.

Needless to say, this was a life changing summer for the both of us. It is always so encouraging to travel to different parts of the world to be reminded that our God is truly a God of all nations who is mighty to save. We are continually amazed that we get to be a part of what He's doing.

i have been waiting for you to update the blog about your summer! :) I'm not gonna lie... i'm slightly jealous - i would have LOVED to have been there. P.S. I am obsessed with Megan Rad! Her husband, Jesse, is joining staff this summer too. Our initial connection was made when she told me yall joined staff together, but Chris and I became instant friends with them!

Thank you so much for sharing Elizabeth! I had chills while reading your blog. I can't wait to hear all the details that are often so hard to put into words!

Hey girl! I just now found out about this blog! Reading it makes me miss you. You're always so funny, even when you're not trying to be! I am so happy for you and Andrew. You guys look so happy! Congrats on getting a house! That's awesome! I can't wait to build, it will be a little while though. I have a blog of my own but it is mostly about my scrapbooking, card making and other crafty things. I think I'd like to create one about life though, kinda like yours. I'll work on that...hmmm. Anyways, I miss ya girl! Hope all is well!