August was the longest, shortest month of my life and now here we are staring into October. With a two month old! Can this be right? 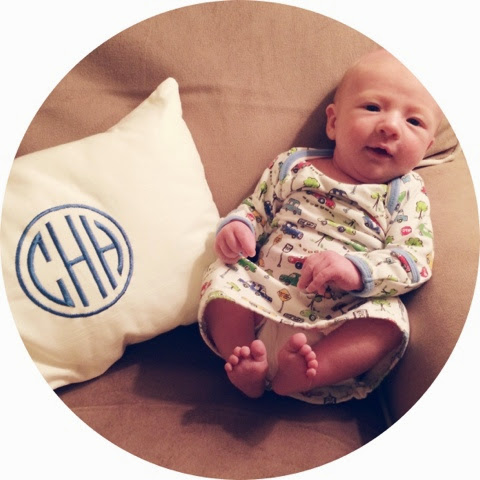 Is Charlie really already cooing and laughing and scrunching up his nose? 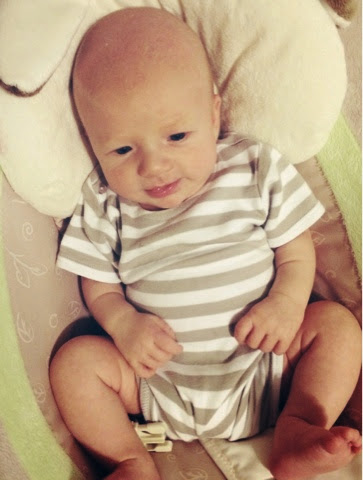 Could it honestly be time for him to be grabbing at my hair and squealing with glee when he clamps his fist over a few strands? (Ouch!) 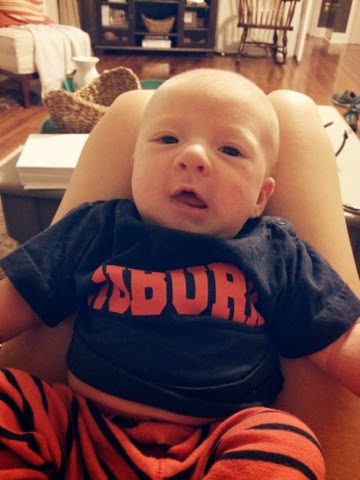 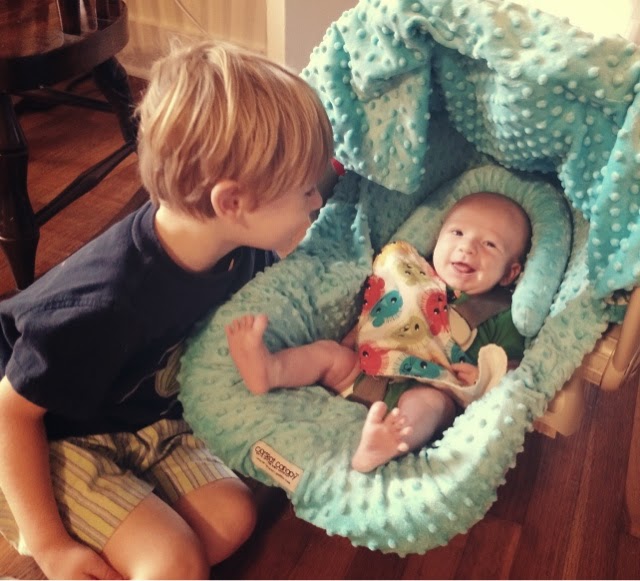 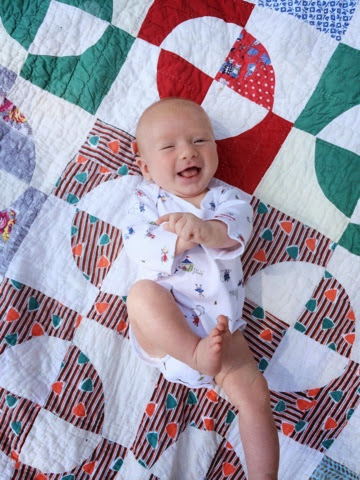 Charlie is still as precious as they get, this little guy. He is starting to take some naps outside of my arms which is sad and liberating at the same time (You know the paradox, mamas, don't you?) 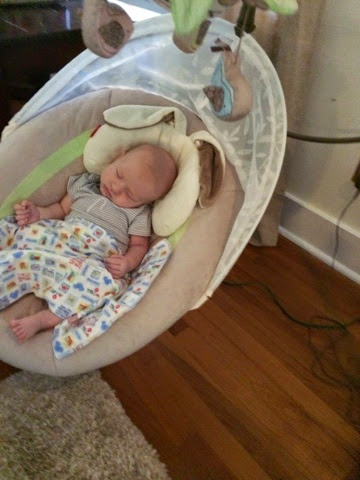 He adores bath time and his pouty lip (Oh, that pouty lip... could eat you up, pouty lip!) turns right side up and giggles come pouring out as soon as we walk into the bathroom. Those chunky little legs start their power kicks and man-oh-man, says he, get me in that water!! If the water didn't turn cold we might just pass the whole day in that tub that sits in front of a mirror... so he can say hello! to the other Charlie and hello! the other Mama. 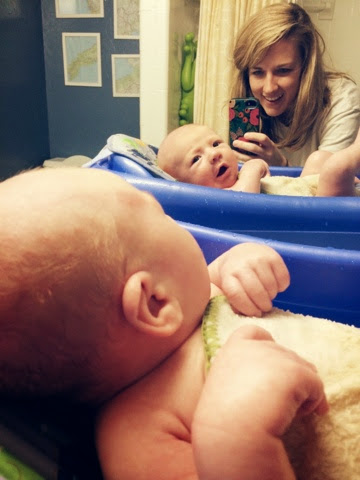 And then we go onto the changing table for fresh clothes and there go his legs again because DINOS. He just loves the stuffed dinos starting down at him over his changing table, and so they also double as a non-mobile mobile in his crib (that he doesn't sleep in because I'm a nervous mama and he's still in our room). Oh, Cheeky Charlie, I wish your legs kicked like that forever. Such a sweet way to let everyone know just how happy you are. Like joy is literally bursting out of your little body. 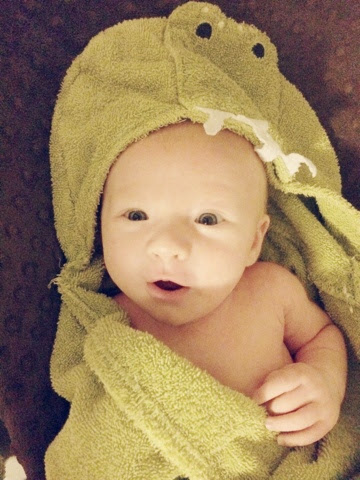 And I know every baby does this but can I tell you how cute it is when he talks?! "Ahh goo" and "Nahh" and "Ooooh" and he might as well be writing me a love poem. And the way he mimics me by sticking his tongue out when I stick my tongue out? Just head over heels for this Charlie Boy. Those Harwell boys are heart-thieves, you guys! 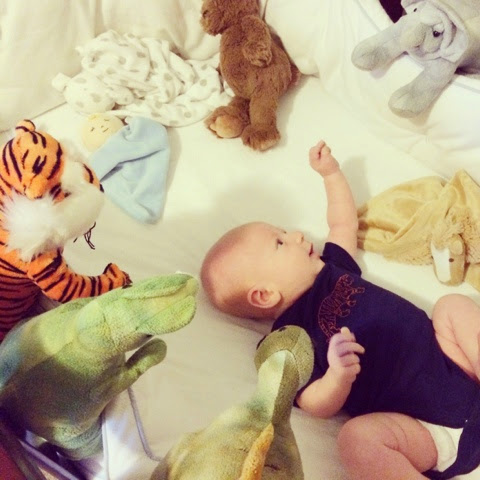 September has been a full month! Ministry is in full swing and Andrew has been busy doing what he loves... shepherding, discipling, and sharing the good news of Jesus. We have a new staff team this year: The Wenzlers (Peyton and Andrew) and two girl interns, Mckenzie and Hannah. They are all very dear to us and more like family than co-workers. We have a weekly meeting on Tuesdays where Andrew has been teaching through the book of Acts and then we have lots of different groups meeting throughout the week to study through Scripture and to learn how to walk with Jesus. Last Friday, Mckenzie shared the gospel with four Kappa Deltas. All four said they had never heard it before (all growing up in Mississippi!) and all four chose to follow Jesus. Four lives changed forever.... future marriages, future children, future endeavors... all impacted because of this one day. Incredible! 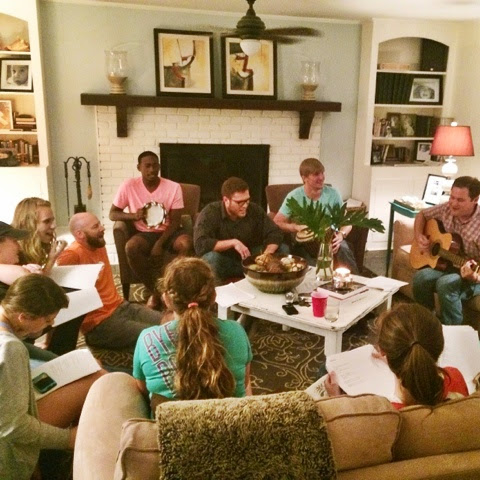 Andrew has started his seminary classes again and drives to Jackson one day a week to take a class at RTS. We continue to be so grateful for this opportunity for him to learn how to thrive in ministry. 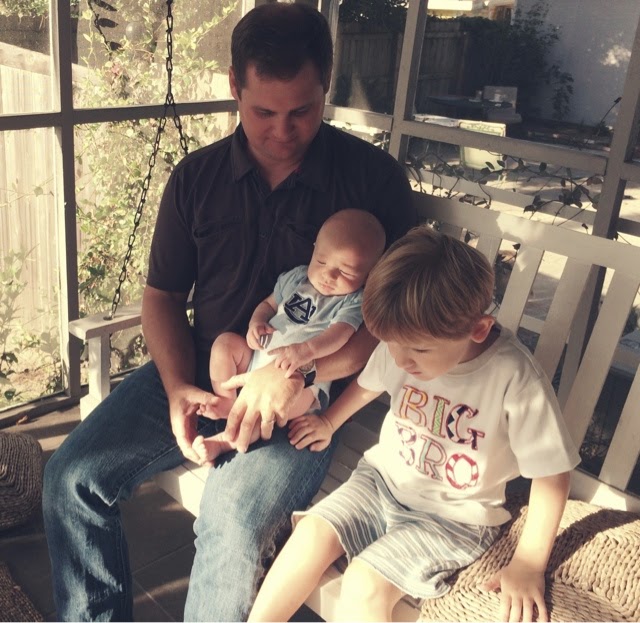 My sweet mother came to Hattiesburg on her birthday weekend to lay down her life and pick up my children! It was so fun to spend time with her and to get caught up in housework. One of the first things I did was clean up a broken lamp that had been on our bathroom floor for three days. Yes, broken glass on the floor for three days and that's just where I am in life, folks. We celebrated her birthday with an RV party because that's what Wilson thought she needed. He's into themes! And RVs. 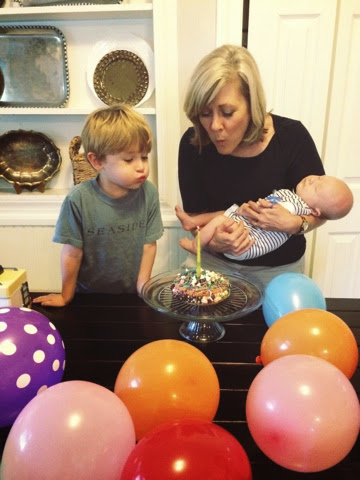 She left on a Monday morning and Andrew's mom showed up at the train station that afternoon to stay for a week! I mean, really-- back to back help?! I am a lucky girl. Mrs. Libby spoiled me to death by making three loaves of bread to put up in the freezer, making muscadine jelly, organizing Wilson's Legos and my spice cabinet and sweeping/mopping all of my floors. Who am I to deserve these incredible mothers? Andrew's dad showed up on that Friday for the weekend and he was so sweet (pun intended) to put up with the exile of sugar in our house. Yep-- we said a farewell to sugar four weeks ago. The first week was brutal but the benefits have far outweighed the loss, and I really can't believe it but Andrew has been more committed than I have been. 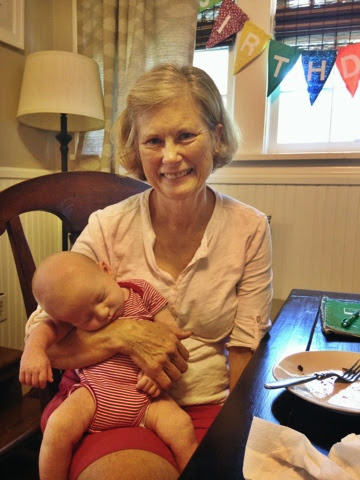 Wilson started soccer this month in a park league and it is just the cutest thing ever. A little man in high socks and cleats? Oh my goodness! Wilson is just a little bit whiney and a lot dramatic but we think it's good for him to learn that there are rules outside of his authority. Just because he wants to win does not mean the world yields for him to win. (Because that was one of the first things out of his mouth at practice: "No one is letting me win-uh!" Yeah, win has two syllables when you are whiney-pants.) 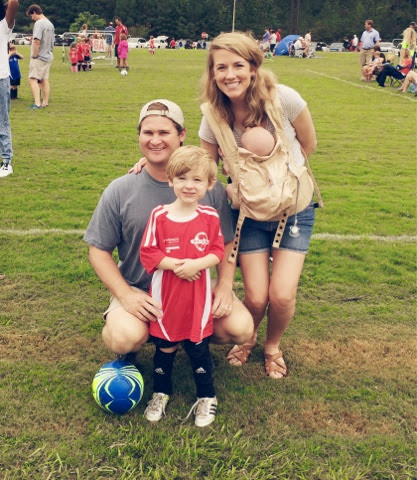 At the first game he scored three goals. Three! Could not even believe he was my Little Man. And at his next game he scored a goal for the other team, used his hands to get another goal, pulled his shirt over his head and ran around, and swung on the goal at the opposite end of the field where the action was... like it was the monkey bars. So basically we are regressing, but that's probably because we don't go to the Wednesday night practices (because of church) and I'm sure our super competitive coach (yes, he really is.... with four year olds) is not thrilled he got the Harwells and monkey boy on his team. Oh well! We are loving it and I'd do it all just to have super cute pictures because I'm a little bit shallow like that. :) 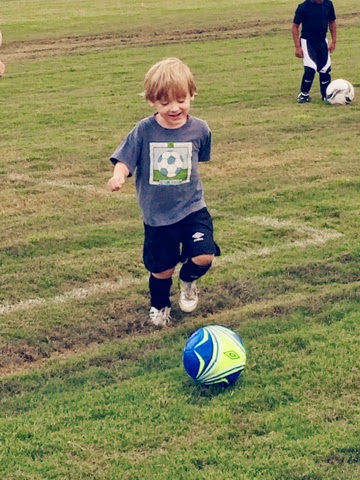 I still have some of those cloudy days that come from having a newborn in your house... feeling like my hand are always, quite literally, full. Instagram pictures and smiley faces on my Facebook statuses don't really tell the in-betweens of life in this house. Most days I feel like there are a lot of metaphorical broken lamps around here that I know are important but I just.can't.do.it. Like return that phone call or reschedule our teeth cleaning or take a shower or water the (dead?) plants or sit down and play with Wilson for more than five minutes. Motherhood is hard because dying to self is hard. But I have these two precious little faces looking up to me and Andrew to provide for all their needs--and that is how I know that death really is life. Because although being needed by someone all day is so hard, that means there is someone at the other end of that need-- two (adorable) little boys that take me to the end of myself, which leads me to Jesus. And that is how they fill up my heart. 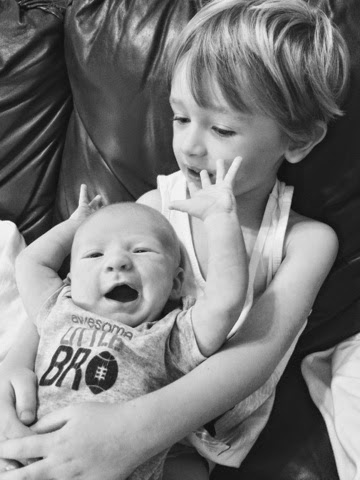