I started planning Wilson's costume in my head in August... A lego. It made so much sense because it's what he loves the most right now. I knew from last year that Wilson would want to be anything but what I suggested and that his ideas would change every two days. So I had to intervene early and make him think this was his idea or Halloween would be a logistical nightmare. 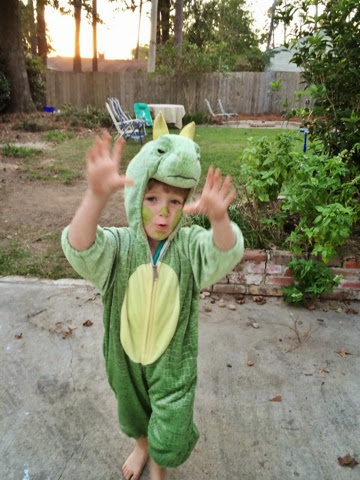 Well, I did convince him (after talking him out of being a lego truck, because how would we even manage?). And then two weeks before, I started back peddling--because, somehow, finding and painting a box felt like the biggest obstacle in the world to climb. And I am.not.supermom.
So I found a $4 Dino costume at a consignment sale and started my pleading. You would be so scary! You could growl! You have a tail! Charlie will think it's funny! Look at this funny head! Nope, I want to be a lego. You could wear face paint--Face paint? I want to be a Dino. 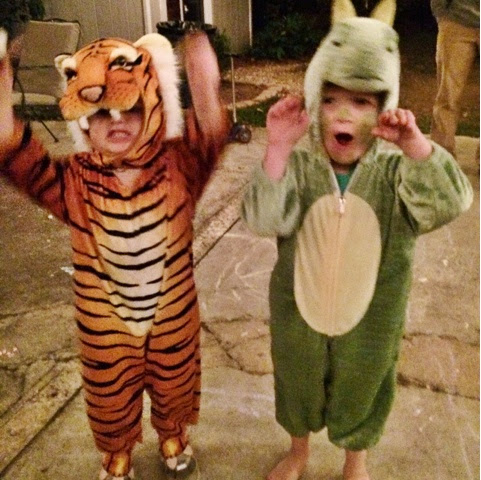 Face paint for the win!
We had a Halloween party in our back yard for our students on Thursday night. I asked Andrew if he could build a firepit...you know, like dig a hole in the ground and throw some wood in. And this is what I get, because this guy doesn't just dig holes! 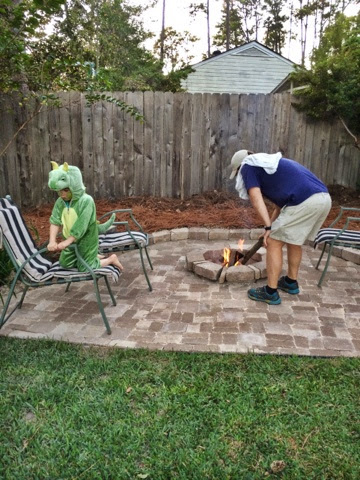 Charlie and I dressed up as mama and joey kangaroo and there's just nothing quite like a baby in animal ears. 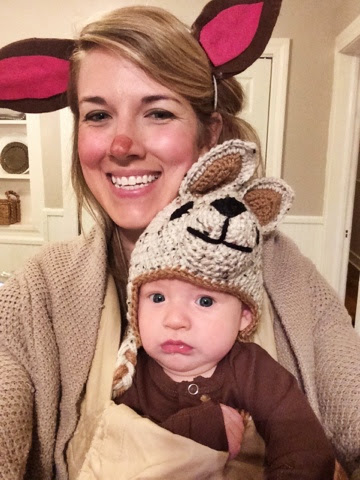 Friends in our backyard is among my most favorite things, so that night was perfect. Chili, twinkling lights overhead, a fire crackling in the background... Hello, Fall! 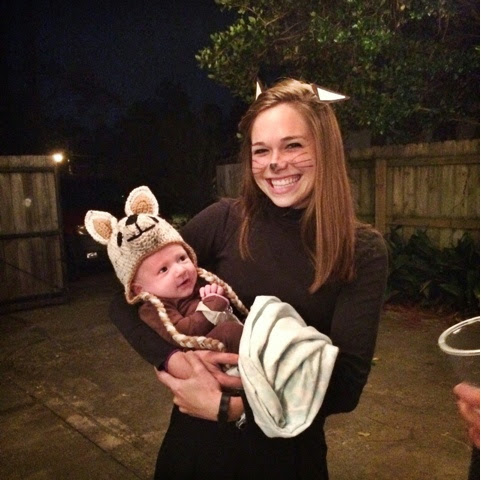 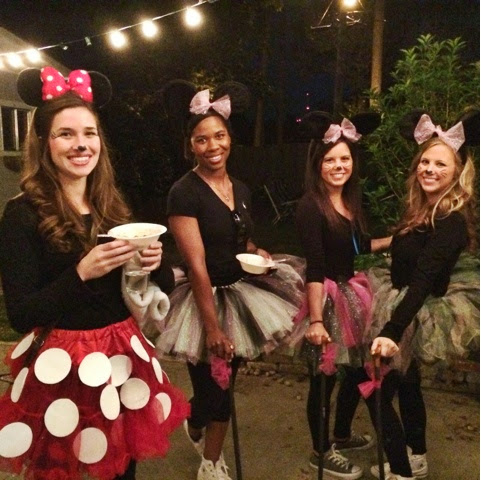 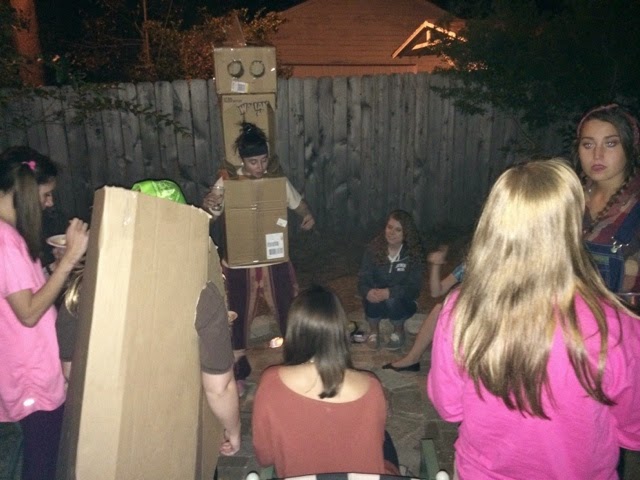 A cool side note is that one of the girls that came had been wrestling with the gospel for a couple of months. She sent a text to Peyton later that night and said after the party she felt unsettled and drove around by herself for awhile, praying and thinking, and she decided that night, in her car, to trust Jesus fully as her Savior. That has nothing to do with the party, but just served as a reminder that the people that come in and out of our house have eternal stories. 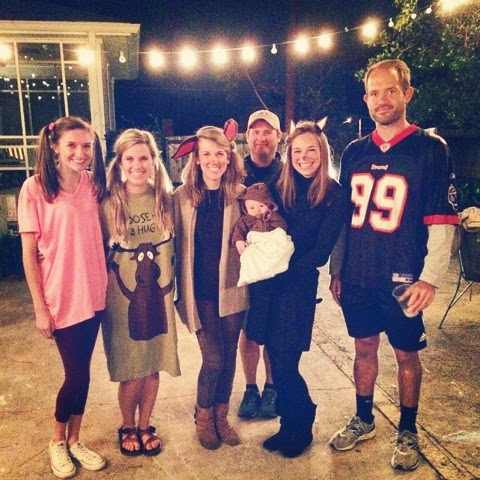 Another side note is that I love our staff team. We lingered over the fire an hour or so after everyone was gone, simply because being together is so fun.
For school, Wilson needed a "potty friendly" costume so Amazon Prime and Auburn football saved the day. And Charlie's kangaroo onesie and white duct tape made him into a cute little accessory for some priceless pictures. 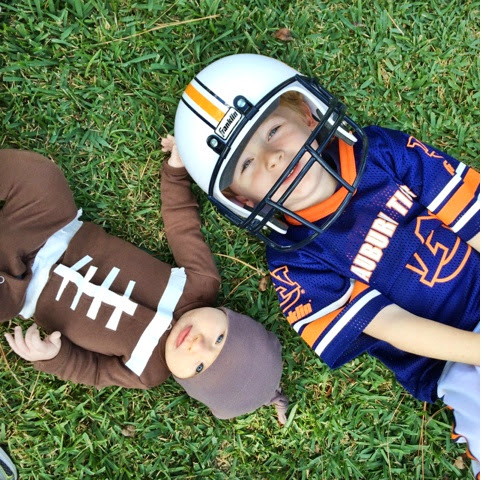 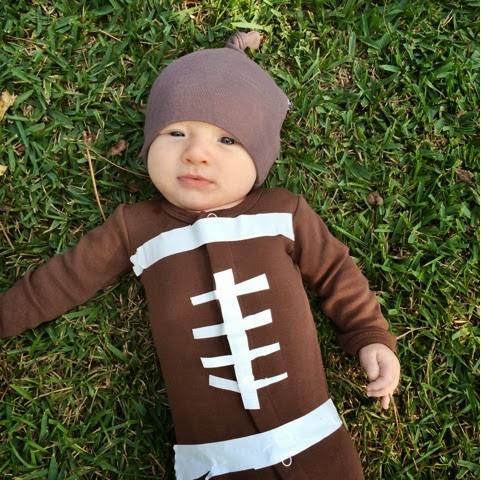 We spent Halloween night in a nearby neighborhood with friends and Wilson got to go door to door with two of his bests: Benji and James. 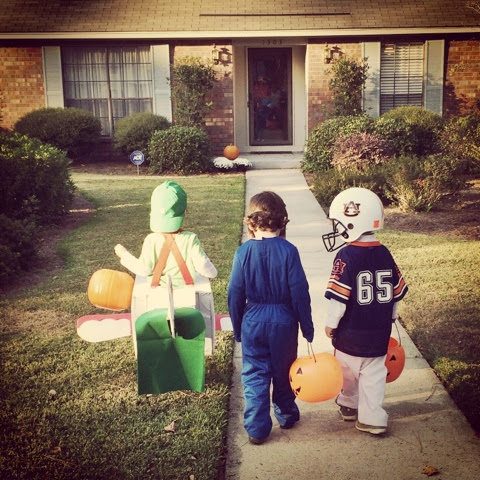 We headed back home to eat dinner and look through the loot. I told W to pick out one piece for the night and would you believe he picked the tiniest little tootsie roll? 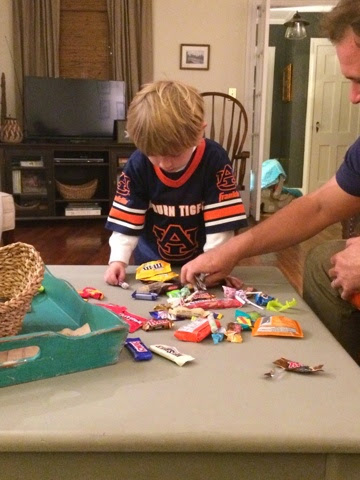 I kind of just want to throw the rest away (Because chocolate is a problem for me). Good thing we work with college students! 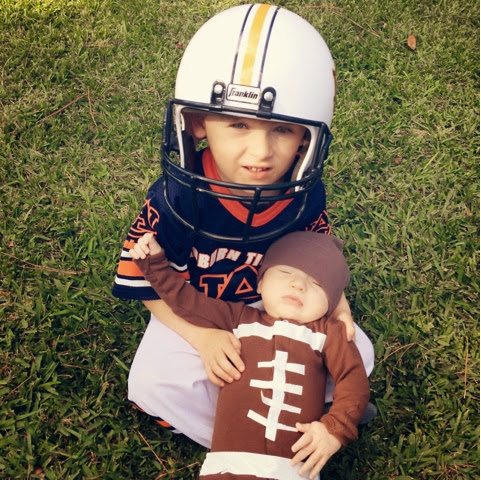 "When Jesus haunts our Halloween, we remember that the forces of evil, which we can be so prone to fear, are actually terrified of Jesus. Everyday is a spook for the devil and his demons, and Jesus does the haunting. The decisive blow has been dealt, and soon we will land the final punch.

Jesus has promised his gospel will advance (Matthew 24:14). He will build his church, and the gates of hell will not prevail (Matthew 16:18). And so when Jesus haunts our Halloween, we join the triumphant anthem: