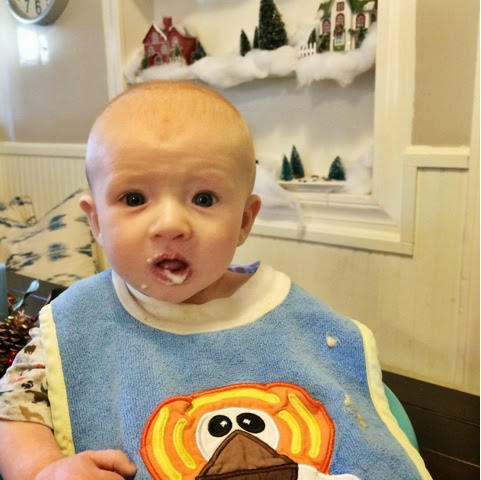 Our Charlie Boy turned five months old in December and I'm just so teary about the ball of preciousness he is to our family. He is mostly very happy and gives us the biggest grins that take over his whole face. 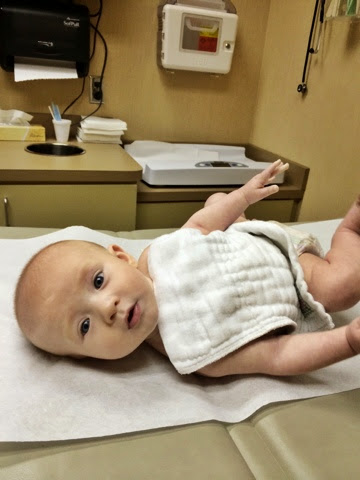 At his four month check-up he was in the 92nd percentile for length and 12th percentile for weight, but he's possibly the cutest little string bean you've ever seen who adores his brother. And his brother says the feeling is mutual. 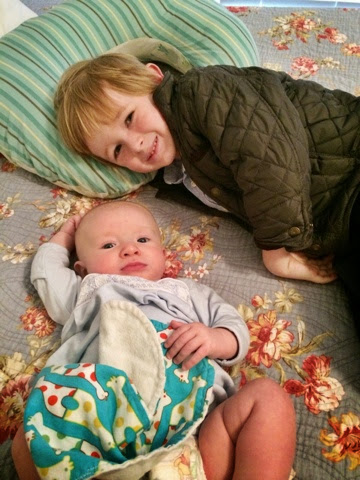 Back in November, I saw an add for a Lego Fest that was coming to Biloxi in December. I just couldn't fathom all of these legos being an hour away and not taking our Little Man. I think his brain is made of legos. 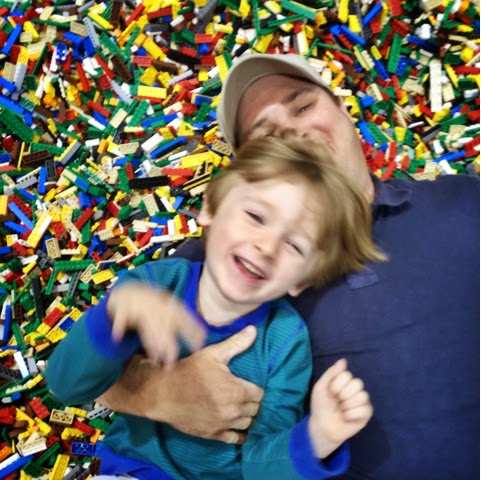 We went with one of his best friends, Nathan, and had the best time. As much as these little plastic pieces drive me crazy, I'm constantly amazed at how they bring out the engineer in Wilson and I know they are good for him in so many ways. 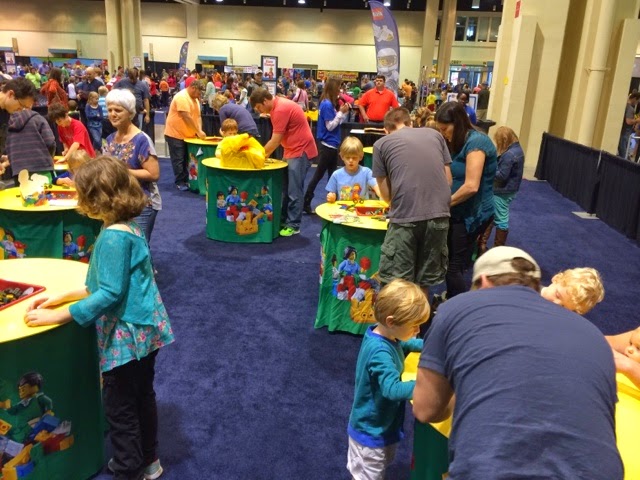 Last Christmas I was so sick with Charlie, so this December I felt like I had a mile long list of things I wanted to do with the boys. A gingerbread house was at the top of the list and it was so fun to share it with one of our favorites (Em) and Cade.... notice how W wedges himself inbetween them because he's not really a fan of sharing Em-a-wee. 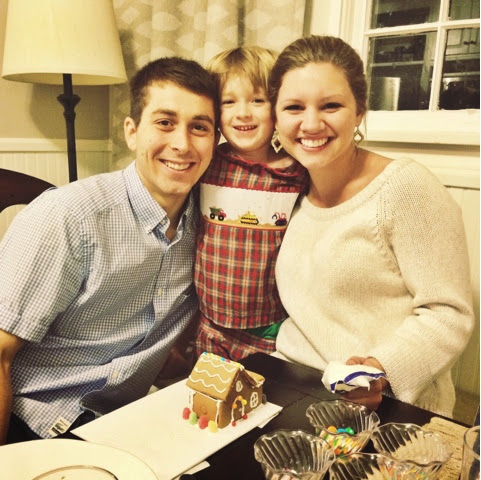 Lewis Lights are always on the list and this year we took a trip with our church nursery. 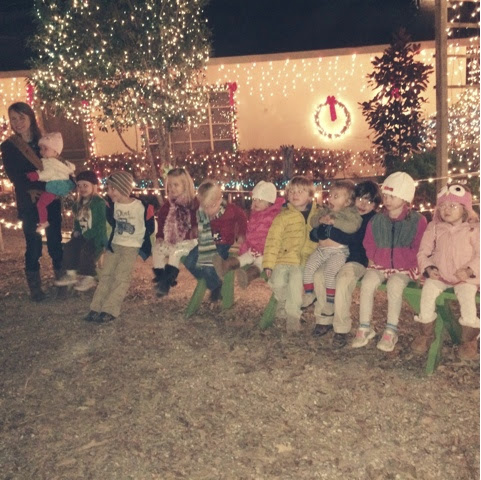 Andrew learned some Christmas carols on the guitar and we had a night of caroling with our students followed by singing as a family almost every day. Wilson would tell us he didn't like these songs (he only wants to sing Wheels on the Bus) but then we would hear him singing "Hark the Herald Angels Sing" in his room while playing legos. 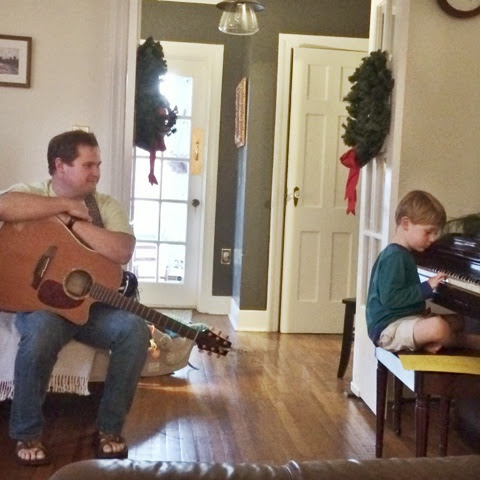 Santa. We just don't know what to do with him. On the one hand, I love imagination and think it's important for children's cognitive growth. On the other hand, I kind of hate how he robs Christmas. And frightens children into obeying. And creates a general feeling of greed. Soooo... we've continued to tell W that we are pretending that Santa comes and fills up our stocking. And we tell him how much fun it is to pretend. Well he's not convinced, y'all. Santa is real because he's seen him. (And shouted across the room to him because he was too scared too get to close to tell him that he "just wants some legos!") 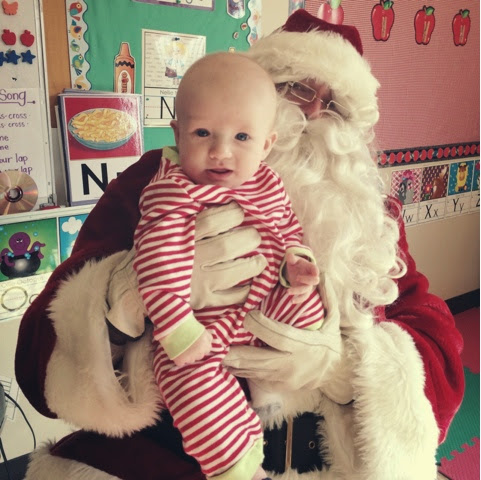 The last part of December was full of hot chocolate and board games and wrapping presents by the Christmas tree (that Wilson still says he misses.) It was so nice to have some low-key in our lives after a very long season of full-speed. 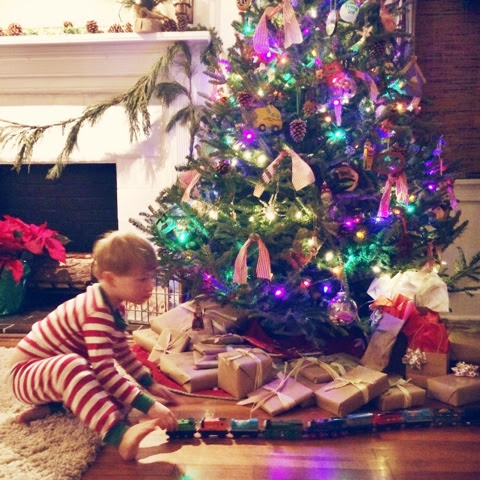 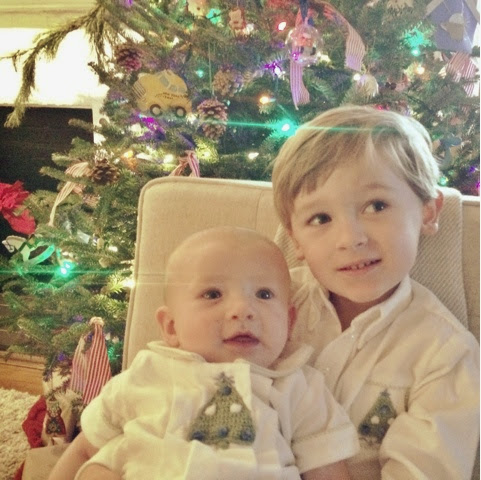 Andrew's parents came to Hattiesburg a few days before Christmas and it was fun doing a lot of "nothings" with them. 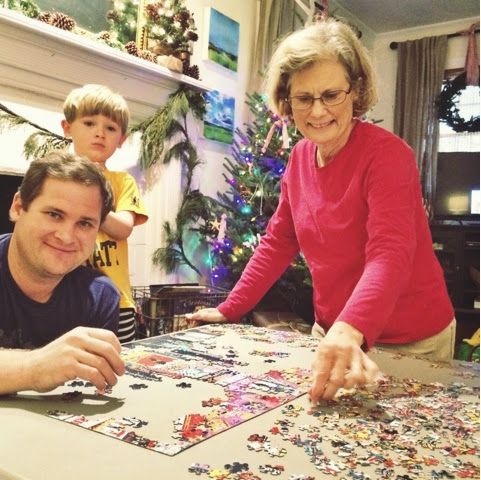 We've kept our tradition of treating the 23rd like our Christmas Eve. We bake sugar cookies and leave a few out for that tricky Old Santa. Wilson always makes sure that he's only going to eat a few and not the whole plate. 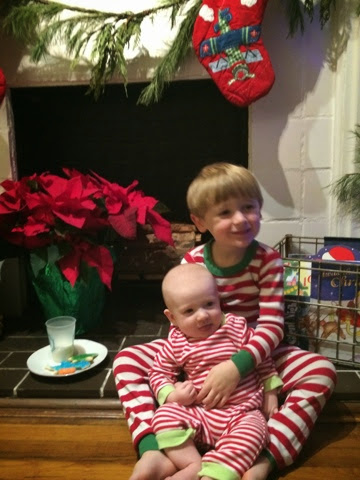 Mine and my sister's favorite Christmas tradition was always opening our presents from one another on Christmas Eve, so I thought it would be fun to carry this tradition into our family and let the brothers give a gift to each other. They both got cars and they both were happy boys! 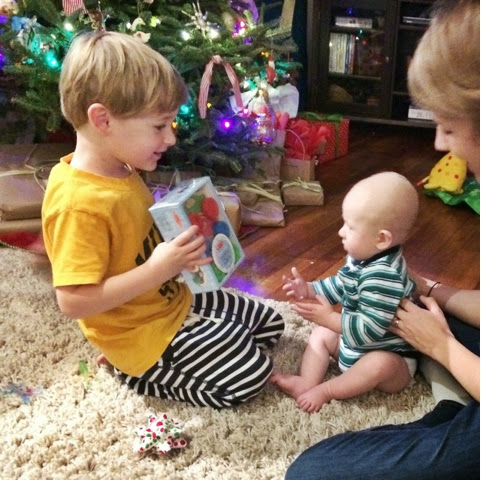 Christmas Eve was our Christmas morning and we woke up to coffee, casserole and gifts waiting by the tree. Is there anything more exciting? I love Christmas. 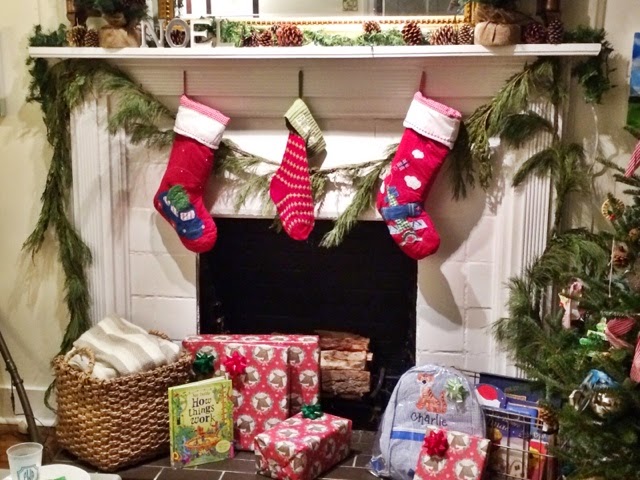 Wilson's favorite gift was a lego airplane and he and Andrew spent the whole morning building it. We went to our church's Christmas Eve service that night and then packed up to hit the road to Kentucky in the morning.
We were thrilled to finally get to Kentucky. Mom always outdoes herself making Christmas so beautiful and memorable. As usual, she and Dad spoiled us to death. 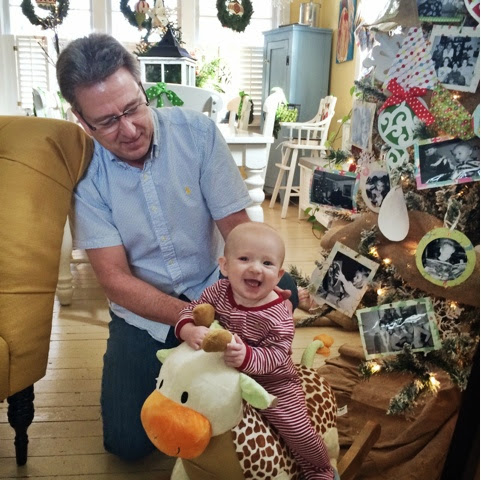 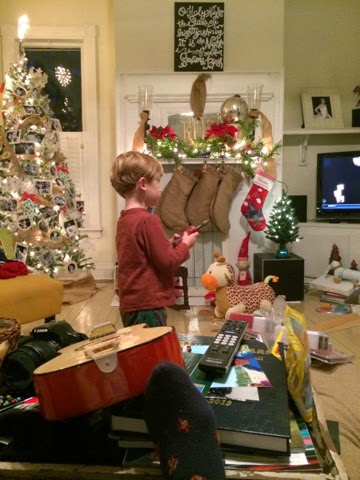 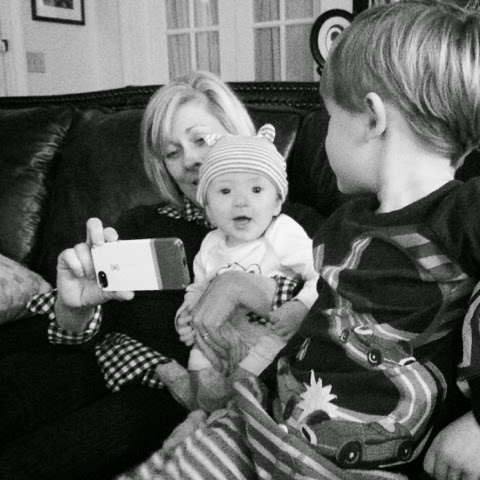 I somehow didn't get a picture with my Dad's mom who made a sweet trip to see us while we were in. (We love you, Mamu!!) But I did grab a couple with my Mom's parents. The boys love all of their grandparents and these two especially make Wilson giggle with joy. 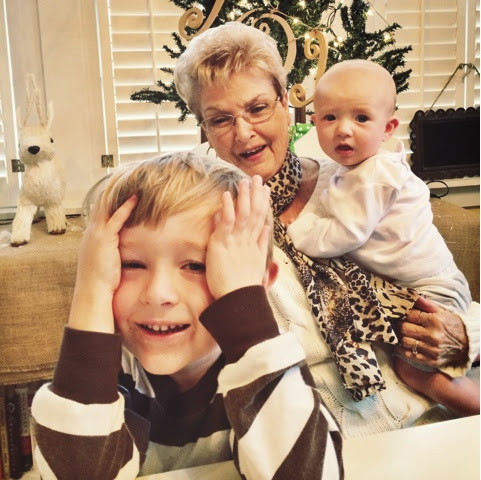 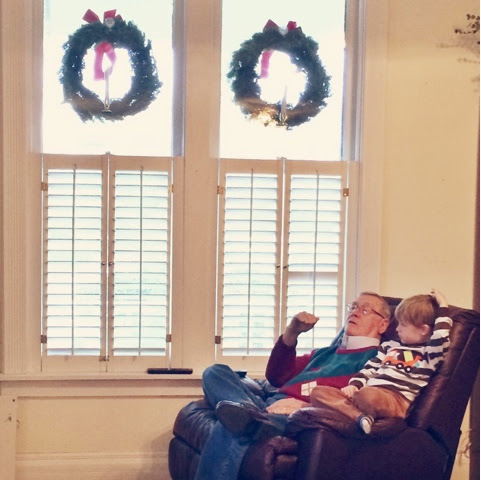 We played travel bingo all the way home, celebrated Andrew's birthday the next day, and then unpacked and packed up again to head to Christmas Conference. 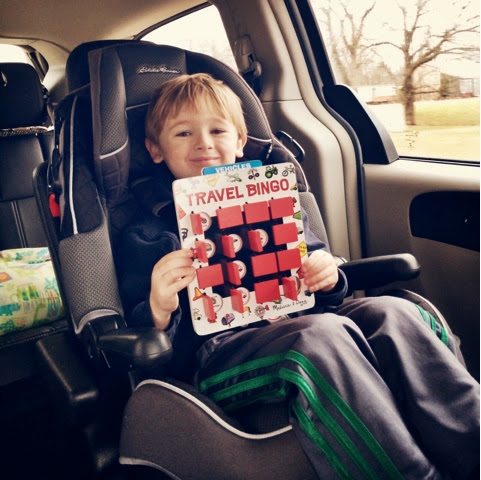 This December my heart was so heavy thinking of so many friends and family in the midst of hurt and brokenness and grief. But one of those sweet friends told me, "Christmas is for broken people like me. That's the whole point." Isn't she right? The older that I get, the more broken this world feels and oh how my heart longs for Christmas-- the coming of Jesus into the pain. Not only to walk with us through it, but to fix it. He's here, Immanuel, and He is working... bringing all things back to the way that they should be. His kingdom is the already and the not yet, friends... but one day it will be the already and the now and always. Come, Lord Jesus.