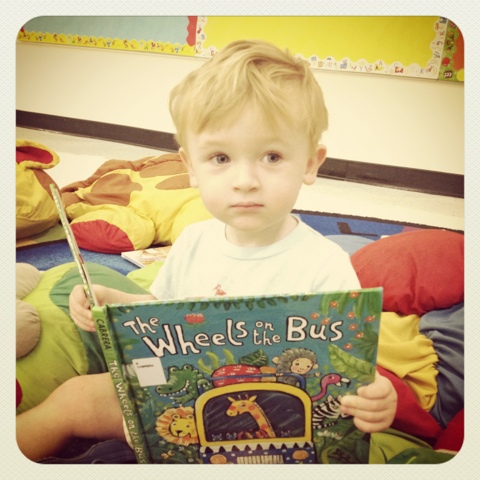 Honestly, I've been back and forth about continuing these month updates on W. Mostly because I'm lazy but also because I feel like I might be overdoing it...

Then I realized one of my favorite things to do is go back and read what Wilson was like a year ago. And I also realized I'm recording this NO where else (See you never, baby book), so I think I'll continue. (You're welcome, Mom!!) But I am going to take the reigns from Wilson and write the updates myself... because, let's face it, it's going to have to happen before he realizes what I'm doing. :) 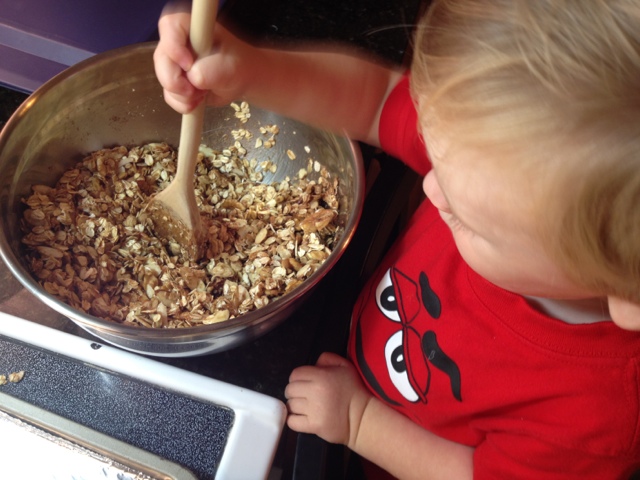 This kid is such a joy!! Sometimes I catch myself complaining about his two year oldness.. and then I'm around other two year olds. And I think, "Wow, Wilson is a great kid." I know that must sound a little bit boastful (and biased), but I'm telling you that I am a terrible parent and I know I have nothing to do with how sweet he is. It's pure grace. 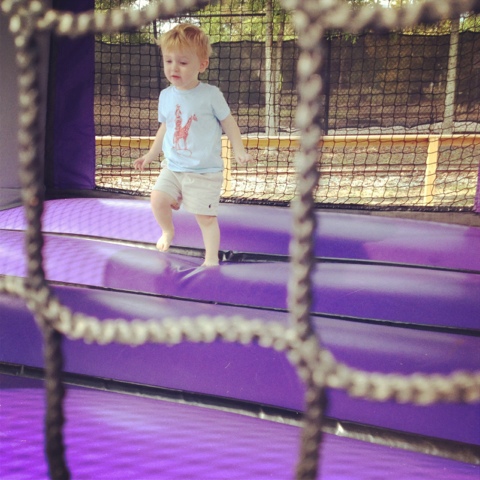 Right now we are spending alot of time at the zoo. He has just discovered that he loves to jump and (praises!) they just got a jump house. Lemurs and jumping all in one day... he leaves a new person. He'll say, "Watch this Mama!" and do an intentional face plant and I can't believe this phase of his life has already begun. 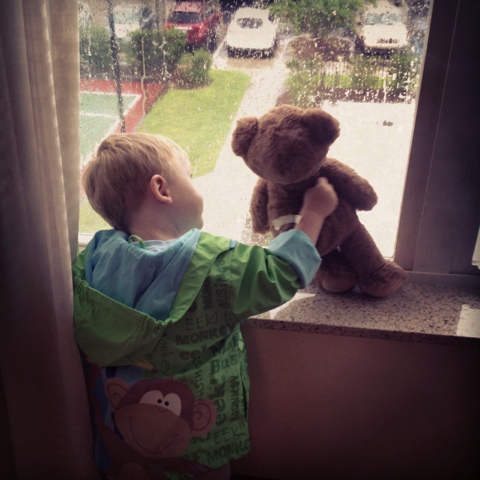 The sweetest thing is to watch him with Baby Bear (thanks, Uncle Brad!), who is of late his best friend. He was telling him here, "Look Baby Bear, that's rain!" He reads to him, sleeps with him, shows him how to do things... I think we might have a teacher on our hands. Or maybe a stellar big brother. (That is not an announcement!!!) 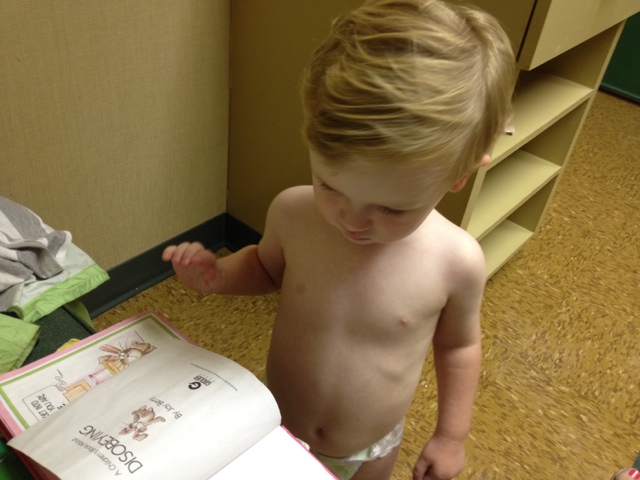 He's a studly stud with a killer hair swoop. At our last doctor's appointment he didn't mind the nurses at all (who give the shots!?), but when our sweet doctor walked in he went toddler-crazy on me. He had never done that before so I was not prepared for the clawing, wailing two year old. I may have cried, too, when he got a shot. 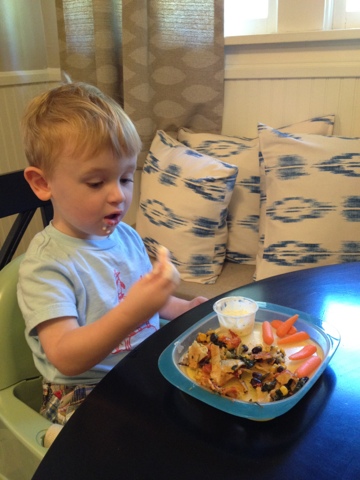 I don't know why I've held this off for so long, but he has finally joined us at the table! He keeps us entertained with his songs and commentary throughout meals. He really loves to sing. He can sing most of "Jesus Loves Me" and "The Itsy Bitsy Spider". 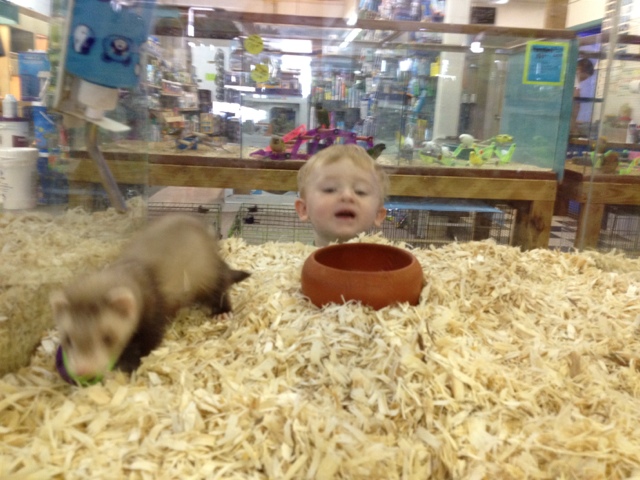 In case you've been hiding under a rock, he also loves animals. 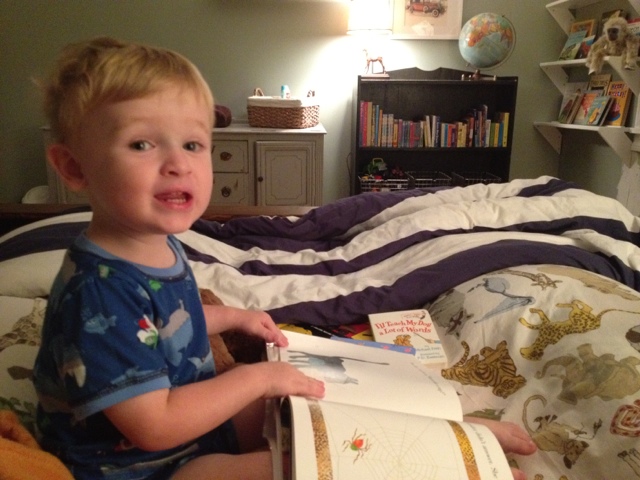 He has been in his big bed for a month now and OH my goodness, y'all, it was the SECRET MIRACLE WORKER for our family. I don't know if I've ever talked about this on the blog, but Wilson has been a terrible sleeper his whole life. At least three times a week he would be up in the middle of the night or at four in the morning ready to go. This mostly resorted in him sleeping in the bed with us (judge away, judgers!), which meant half-sleep for all of us. But now, he has slept through the night for a MONTH in this bed. I can't even describe the joy. All that to say, we all love the new bed. 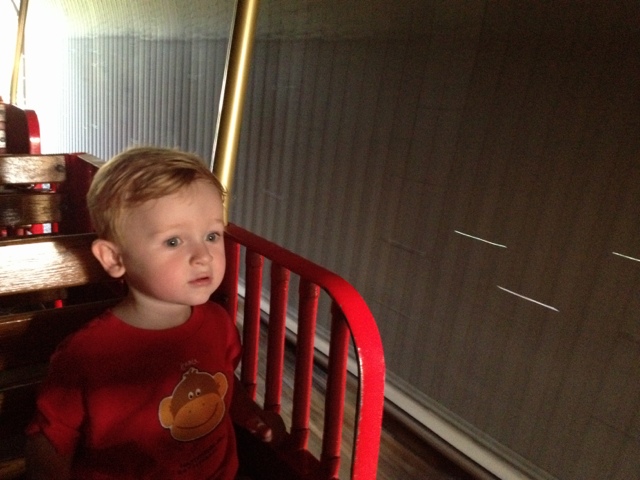 One of his newest phrases is "How 'bout..." as in, "Mama, how 'bout play choo choos?" but he loves it so much that he interjects it in pretty much any sentence. Yesterday he was tapping his chin and looked like he was in deep thought. I said, "What 'cha thinking about W?" He said, "Ummm.." (He also likes to say "ummm") "Ummm... how 'bout choo choos. And animals." I'm totally convinced that choo choos and animals are on repeat in his sweet little mind.

My new favorite phrase of his happens after I say, "I love you!". He answers with, "I luh you TOO!" He likes to emphasize the "too."

This kid just loves life. And I love watching life through his eyes and trying to remember what it was like to not know real pain or suffering and just live with such abandonment. I wish I could create another world for him to live in where I know nothing bad would ever happen to him... but I know that is not reality. Reality is that he is stepping into a broken world, but there is hope of all that is sad coming untrue. We are praying, and believing, that the Lord will use Wilson to be a part of bringing "Thy kingdom... on earth as it is in heaven."

It sounds like he and Brett have a lot in common! Brett says "love you TOO!" the same way. haha. Sometimes all you can understand is the "TOO" part. It's sweet though. W seems like such a sweet little boy! You might not have done anything "parenting" wise to make him this way, but it was definately passed on through your genes. You are one of the sweetest people I know!
-Tamara

Definitely keep the monthly posts up! I enjoy reading about W's adventures. :o) Glad you guys are doing well!