I've been reminded this month that everything comes in seasons with little ones. Remember how I talked about how sweet Wilson was last month? Season.

He is still mostly sweet, but boy have we hit the terrible twos in a fast and furious kind of way. It's almost like he enjoys stirring up conflict and we just don't understand. We're all praying that this is a very short season. 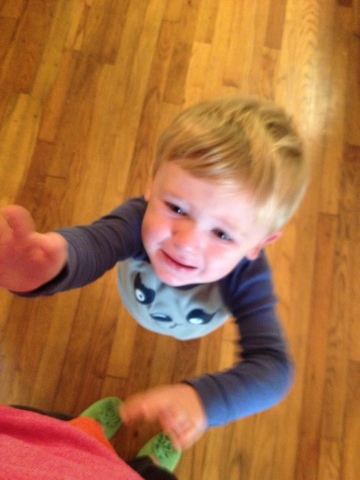 Another season we've hit is too much of a deja vu. He has been waking up in the middle of the night for the past week every night again. I'm hoping it's just his two year molars because I forgot how miserable it is to not have sleep. One positive effect is that he's taking longer naps during the day, but I'd rather have nights if I have a choice in the matter. 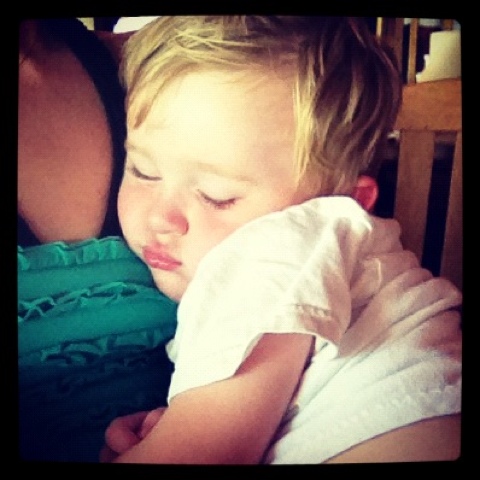 Okay, enough with the complaining. Just wanted y'all to have a dose of reality... He is not a perfect child no matter what you hear me or my mom say!

One thing that's happened over the past couple of months is that he gets excited to see certain people his age! This is kind of a milestone, because for awhile he just ignored other kids and preferred adults. His two favorite friends right now are Margaret and Owen who live one street over and belong to friends of ours from church. He's sandwiched between them in age and I just love their mom so it all works out perfectly! 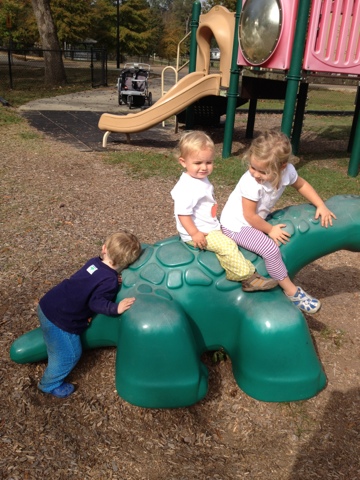 He's also started to answer things with "yeah!" this month which gets me tickled every time. We're trying to remind him to say "Yes ma'am" or "Yes sir" but this "yeah!" stuff is just so cute that sometimes I forget to correct him. 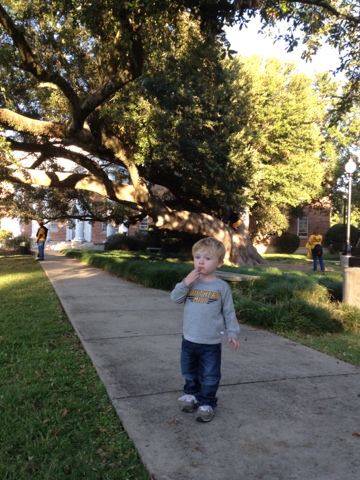 I'm not sure if I've mentioned this before, but he can count to ten now (for the past couple of months) and sometimes he can make it to twenty if I interject some numbers. 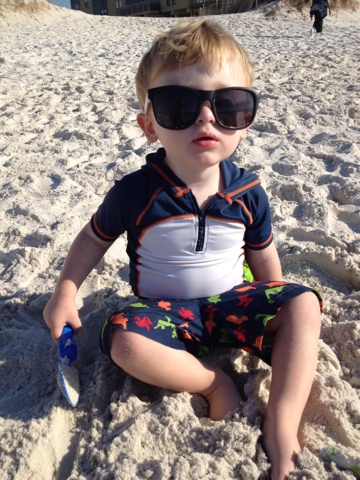 I just bought some finger paints and water colors and he has been enthralled with them both! He loves making pictures. His favorite things to draw are buses, snakes, lions and giraffes. His snakes are pretty good, I'll have to say, and he did draw an "ant" the other day that I could totally tell was an ant before he told me. 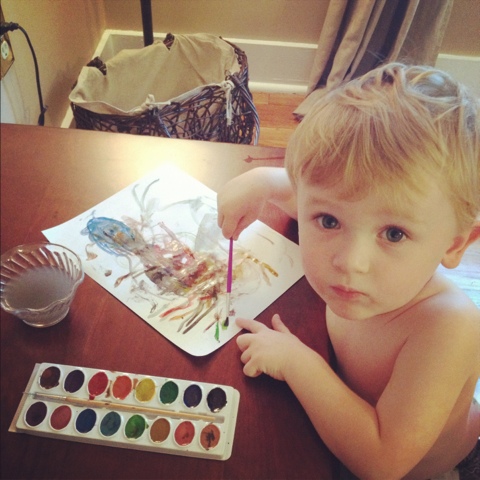 He still loves animals but he has also gotten really into cars lately. He loves racing them and vroooming them around the house, and I just love how all boy he is. 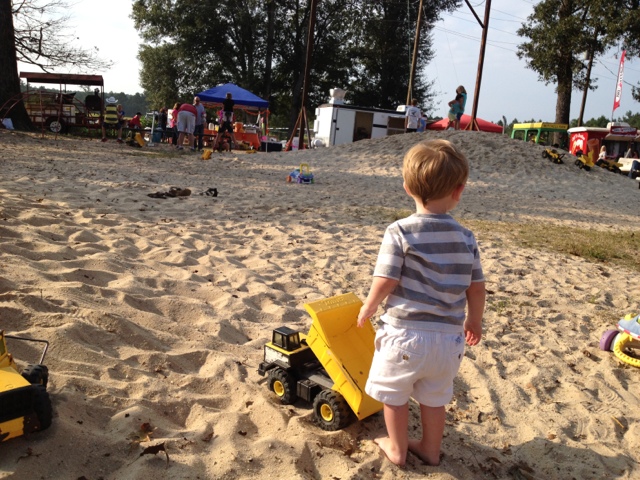 Speaking of being all boy, he's totally got a thing for tools, too. I think his Daddy has had something to do with that. At least once a week he'll say, "Be right back, Momma. Get the screw-driber." And he'll run to Daddy's tool box and be back at his train table "fixing" trains. 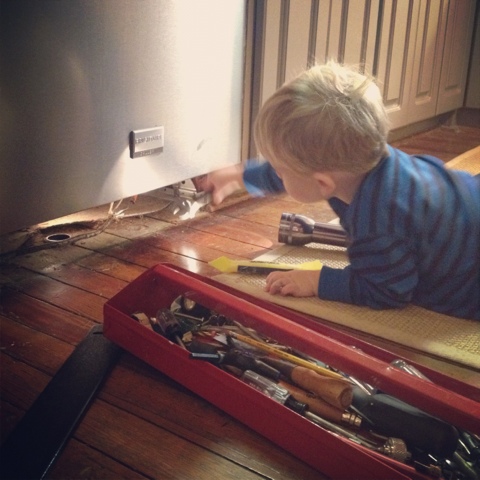 He's also started to make up scenes with his trains and he will leave Andrew and I bent over laughing in the hallway. We'll hear something like this:
"Oh! Do today Percy?"
"Went to church!"
"Okay. Be right back. I'm going on the road."
"No! Cars go on the road."
"Ooohhh noooo... I fell down!"
"Help Thomas! Oh no!"

Sometimes the trains tell each other, " I love you!" and give kisses and I think that's kind of sweet. 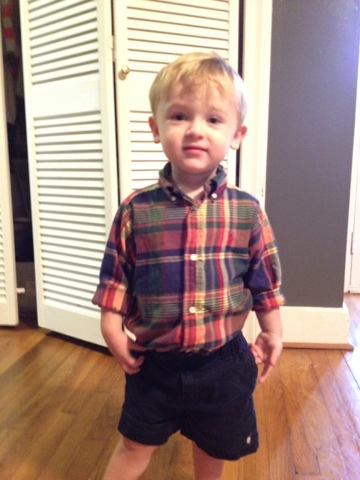 He has started to have some interest in the potty. He's sat on it a couple of times with no accomplishment... but I'm really not too worried about pushing him. That's a fight I don't want to enter into just yet! Unfortunately in our "potty education" he has learned that things magically disappear in the toilet. This morning I asked him to go throw a piece of paper away... and I heard the toilet flush. Oh, boy!


I really can't believe how much he has grown up this month. Where is all this time going, anyway?? 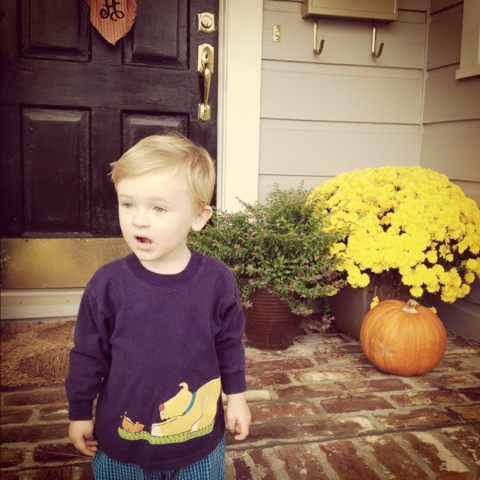 The picture of Wilson sleeping on you is about the sweetest thing I've ever seen and for the record, he will always be perfect is Gigi's eyes, even though I've seen him throw one of those 2 year old fits. It's like it made him mad that he was so mad, just hard to control these new emotions, he'll get the hang of it
:-)