Our Little Man is one month older today! 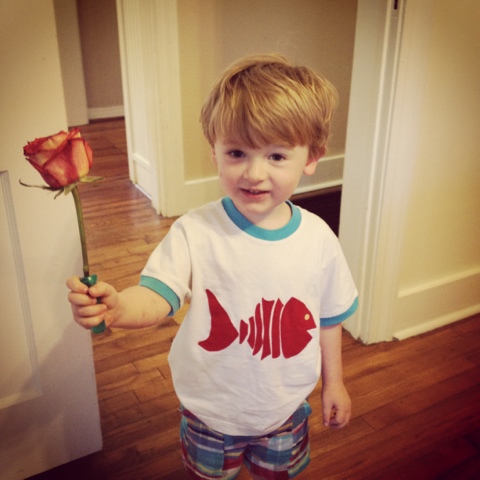 I wrote this on Facebook, but as I am seeing more and more of his personality blooming, I'm realizing that he is my opposite in so many ways. I am painfully shy sometimes, and he is painfully in your face. He says "Hey..." to just about every stranger. But not in a "Hey!" and move on kind of way. It's more a "Hey... this is the start of a full conversation I'd like to have with you" sort of way. 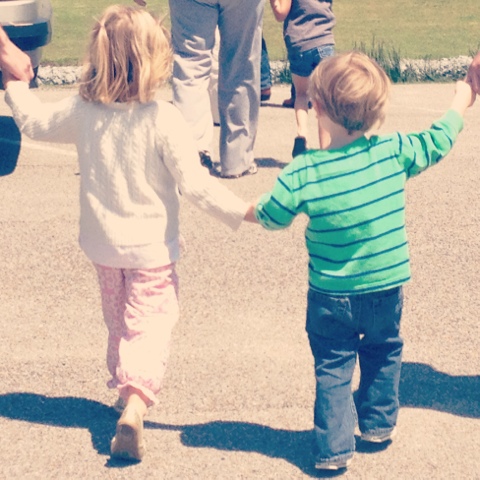 I am mostly drained by people (a true introvert), and he is totally energized by being around people. Especially his best friends, like Margaret. 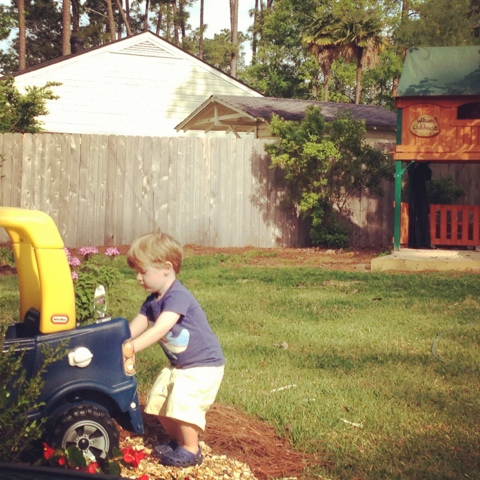 He loves being active. And I just like to be still. I know I'm not the first mom to parent their opposite... but boy is this hard! I need a lot of grace to be an introvert mom to an extrovert boy, but God's grace and mercy really is new every morning.

Tim Keller speaks about "living with the other" in his book The Meaning of Marriage:

In that split second I have the opportunity to ask myself, "Would Kathy's typical reaction be more wise and appropriate than mine?" And I realize my repertoire of possible words and actions has been greatly expanded. My wife has taught me how to look at life as she does, and now I have a greater range of responses and a greater likelihood of doing the right thing.

Living with my opposite is not always a bad thing. Wilson's personality has been inherited from Andrew... and this paragraph rings so true to me. Living with these boys has stretched my personality and made me a better, more well-rounded person. 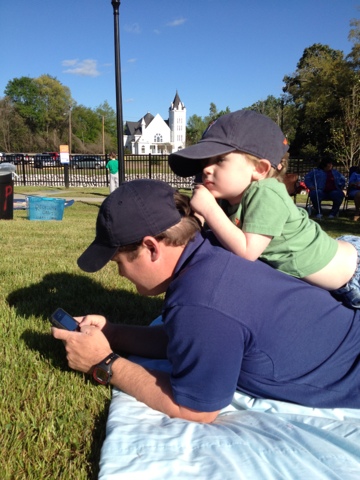 But, this is too much about me... on to this Little Man, who still loves trains. Did you know he got to ride one for the first time ever this month? (If you don't count subways... which I don't.) Our church took a trip from Hattiesburg to Meredian last weekend. I think it was about a two hour ride. I'm really not sure, because we were having so much fun playing and talking with all of our friends. We had a whole train car to our group and the kids were kind of in heaven. 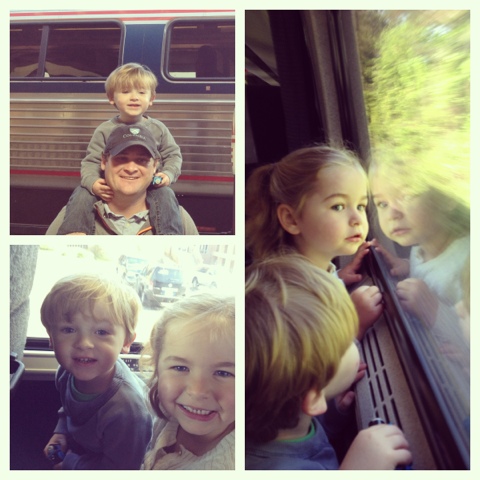 We (just me and W) also made a trip to Kentucky this month. We hadn't been since Christmas, so I figured we better make a visit before we left for the summer! My mom was so sweet to throw a birthday party for me while we were in. I got to see a lot of family... but it was a quick trip so I really didn't get to see any friends (Sorry KY friends!! Next time!!) W loved that it was my birthday (probably because he got cake), and he kept saying "Happy Birthday Mommy!" for about a week. He's pretty sweet like that. 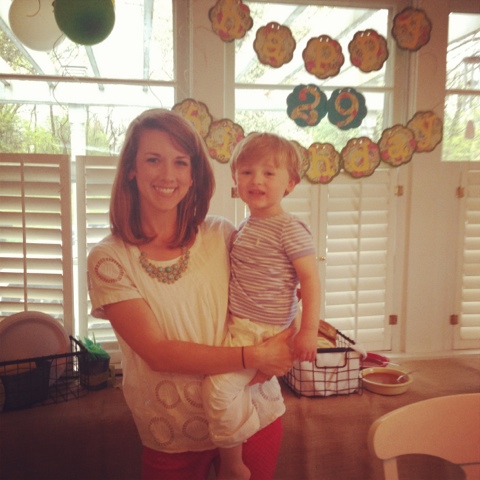 Traveling during Week 2 of potty training was interesting. I put him in a pull-up and just resigned to letting him have "accidents," but this kid was done with wet diapers. I caught myself several times pleading with him to go in his diaper, but he was just not going to do it. I may have cried on the phone with Andrew about all the horrors of toddlers and gas station bathrooms. It was kind of a nightmare. 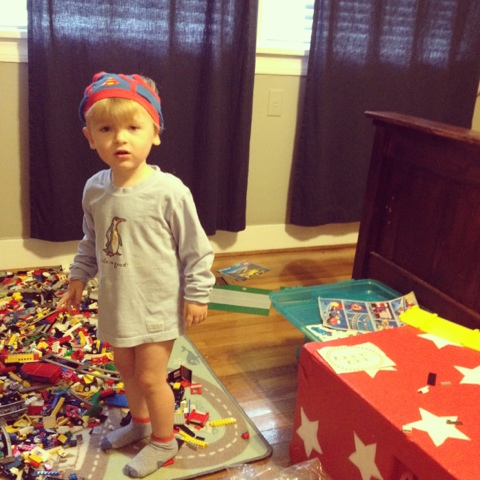 He is still not going #2 in the potty... we are putting diapers on for that. But he has totally got the peeing in the potty thing down. Now if he could just learn to pull his pants up and down life would be a dream. Our potty ritual goes just like this:

W: "Hurry Hurry! I have to go potty!"
Run to his bathroom (both of us).
I bend over and pull his pants down for him. I'm going to look like the Hunchback soon.
He does his thing.
I get a piece of toilet paper to wipe him because that's just what we're doing right now. Is that what I'm supposed to do? I'm confused with little boys.
While I wipe he always ALWAYS sneaks a grab of toilet paper himself and always ALWAYS rips it into two pieces "I need TWO!" and I always ALWAYS say, "Wilson, you don't need that!" and he throws his TP addition in and then says "I'm going to bwush it! It's my job!"
Flush.
I, the humble servant, pull up his pants again.
Repeat 25 times a day.

It's better than days one and two... so I'll just take my portion and my cup. 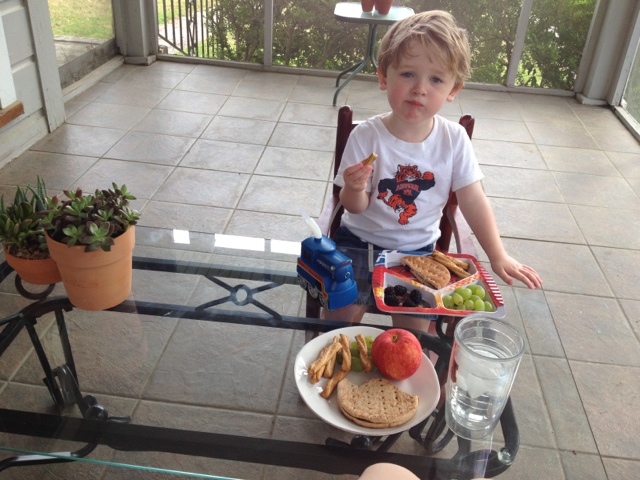 I think the only other big development this month (I've got be missing something... I always do), is that he loves telling and hearing stories. Mostly hearing them. He always asks, "Mommy will you tell a story to me?" and I make up the most ridiculous thing you've ever heard with no plot what-so-ever and he loves it. Sometimes, if we're lucky, he will tell us a story too. Most of them sound just like this: "Once about a time, there was a firetruck named Buntis (It's his new favorite name... we don't know where it came from). And he was purple. He went to the toy store and he got a truck. And he went like this: 'woo-oo-woo-oo-woo-oo'. The end." I love his stories.

A new favorite song right now is "Jesus Loves the Little Children," except when he first learned the song he would say "kiiiiiiids" instead of "children" and I don't know why I loved that so much, but I did.

When he sings it, I love thinking about as precious as he is in my sight (even though I complain, he is exceedingly precious to me), in Jesus' sight he is far more precious. It is comforting to know that he has someone far more powerful and wise than Andrew or I to love him so well. You are safe in God's hands, Little Man. 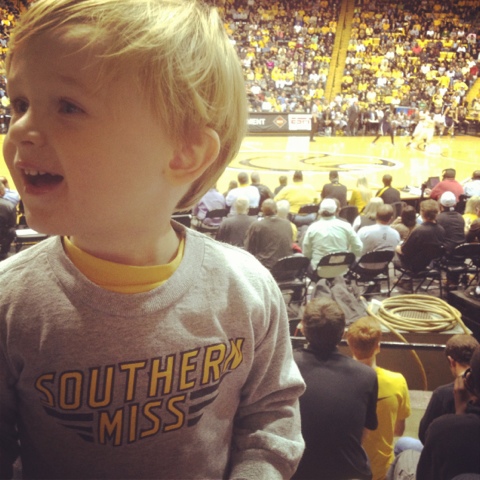 Love this update! Our little guys would get along so well, only difference is my A is a little bit more like you (and me!)